We finished upland bird season last week at Wild Winds Ranch in Grass Valley. Cheryl Shaver of Prineville bagged her first pheasant. My oldest, Tiffany, downed her first pheasant in a long time. We walked back along the water and I saw a fish rise near the shore.

Just for a situation like this, I had brought along a new rod called the Fikkes Fly Hiker. It was a matter of moments to turn it from a hiking staff into a G. Loomis six-weight rod and string the line. To the leader, I knotted a beadhead mohair leech.

I am used to fast rods. This one, essentially a three-piece with a heavy butt section, takes a slower casting stroke with a firm stop to straighten the line on the backcast. It laid the fly out as well as my custom-built G. Loomis. Within two minutes, the leech provoked a battle with a 16-inch rainbow.

Soon Cheryl Shaver brought a fish to hand and then Jake Carse and his five-year-old daughter landed a trout. Fathers and daughters, fishing and hunting. Tiff gave Reesey a high-five and we pointed the truck south toward home.

My friend Randall Knight gave me a new rod of the sort I had wanted to try. The Japanese call it tenkara. 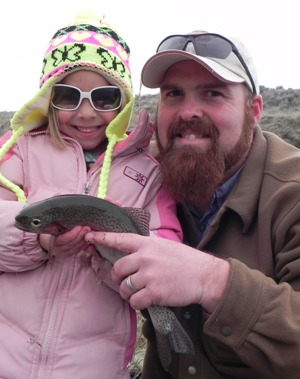 Collapsed into itself, this ultralight tenkara rod measures 16 inches long; extended, it is 8-1/2 feet long. There is no reel. Tie a length of fly line to a tag at the tip and then cast or dap for trout and panfish that won’t take more line than you’ve got. If you get a big one on, try to keep his head up.

This is my third season fishing a ten-foot, 4-weight Orvis Helios rod. It has proved itself through battles with bigger fish than I have a right to catch. To match the line to the rod, I upgraded to the new Hydros, which is supposedly engineered for better casting. I did find it cast better than my previous line, although I suspect that if I want it to cast much better, I should hand it to Scott Cook or Brian O’Keefe.

I traded Jim Crofoot his old prototype Twin reel for the latest version. Built here in Central Oregon, the Twin (www.crofootflyreels.com) holds two lines and is ambidextrous. On mine, I carry a floating line and a slow-sinking intermediate with full backing. Light and smooth, the Twin is especially handy on a float tube, allowing me to switch lines without switching reels or spools.

I didn’t take them fishing, but I wore Steelhead Gloves by KAST Extreme Fishing Gear (www.kastgear.com) on a mule deer hunt in Canada. Waterproof and windproof, they were warm and breathable in extreme cold and trim with good sensitivity, which would have paid off on the trigger if I had decided to squeeze.

Prior to the trip to Chile, I turned over my new Redington wading boots and installed Grip Studs (www.waderstuds.com) across the felt-lined bottoms. Your buddy won’t let you in his new drift boat if you are wearing these things, but you will feel like you can climb a rock wall.

Last year, Columbia Sportswear released the Drainmaker. A drainable water shoe, it is are light and comfortable, great for kayaking, rafting and wet-wading. Step out of the water and the river drains right out the sides. For the best performance, try these shoes with Seal Skinz waterproof socks.

To get you in the mood to get your feet wet, Bend residents Daniel Biggs and Ryan Smith recently released a DVD called Fly Fishing the Cascade Lakes. On the video, Biggs and Smith fish Sparks, Elk, Cultus, Big Lava and more and demonstrate how to tie five stillwater patterns they used on last year’s adventures. 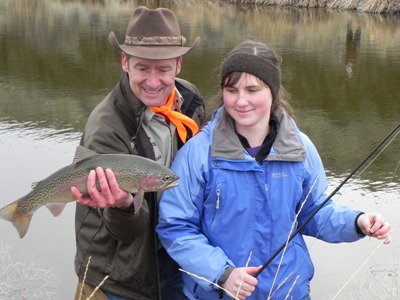 Last summer, I floated and portaged two miles of the upper Metolius in Skookum’s Steelheader (www.steelheader.com). This is the most rugged pontoon boat I have tested, a whitewater-grade cataraft built on a steel galvanized frame that can take a 1,000-pound payload.

If I owned a Steelheader, I would put a Folbe (www.folbe.com) fly rod holder on it. For now, I will install the rod holder on my float tube with their optional strap system. Folbe has made rod holders for spinning and casting fishermen, but this new offering is just for fly-fishermen. The reel seat lays into a cradle. A polymer strap secures the rig.

My friend Jerry Garrity could have used the fly rod holder up at East Lake a few years ago when a trout yanked his rod into the water. It would have saved Garrity a week of casting a grappling hook.