Here in the Northwest, deer begin to shed their antlers in February. By the end of March, most mule deer and blacktails have dropped their headgear. Elk cast their antlers a few weeks later and it is not uncommon to see a bull carry last year’s antlers into the early weeks of April.

Pick up a shed antler on the winter range and you’ve found treasure. Maybe even enough to pay for the tank of gas you burned on the way out to the desert.

Mule deer sheds are measured according to the number of points, tine length and circumference of the antler. The eyeguard is called the G1 and the back point is referred to as the G2. The tine that forks from the G2 is the G3. On a typical four-point frame, the G4 is the point that grows from the main beam. Overall scores are measured in inches. A big one will stretch the tape to 70 inches or more.

Elk antlers are measured in a similar fashion. On a typical six-point frame, the points come off the main beam. The brow tine is called the G1, the G2 is the next one and so forth. A trophy elk shed runs 150 inches and bigger.

According to Jason Preston, a local antler buyer that converts grade-A elk antler to dog chews (www.dogchewz.com), the market for elk antlers is up. The typical elk rack weighs four to eight pounds and A-grade antlers bring about $8 per pound.

In general, the most sought after mule deer and blacktail antler sheds are big and brown, but collectors and buyers sometimes look for other qualities. Antlers are graded according to age and exposure.

“A-grade are fresh, full brown with no cracks,” Preston said. “B are hard white, good and solid with maybe some hairline sun-bake cracks. C-grade are chalk, really cracked, chipped, broken and chewed on by rodents or porcupines.” 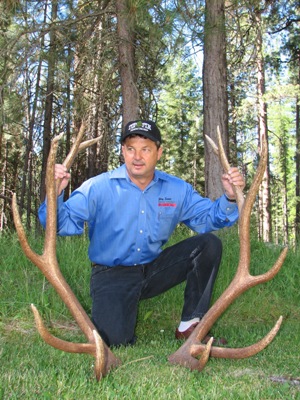 Brian Davis, a shed enthusiast from Redmond, likes to find antlers that have been out in the weather.

“The prettiest ones to me are the ones that have been out for a year, they are still brown on one side and they are bleached on the other side.”

As to value, the prices fluctuate. “It’s like the stock market. Sometimes the white ones are more valuable than the new ones.” Some artists prefer smaller ‘craft’ antlers. Juvenile elk antlers, called raghorns, can be just as valuable as bigger ones.

In Central Oregon, the most common finds are mule deer sheds.

“East of Prineville and out into northeast Oregon, I get more elk sheds,” Preston said. Rarer are whitetail sheds and rarest of all are moose sheds, because there are only about 40 moose in the state. It is not uncommon to come across a deer skull with both antlers, usually a buck or a bull killed by a predator or a hard winter. Shed hunters are supposed to leave those in the field. It is against the law to possess a deer skull with antlers without a deer tag. For more information on antler ethics, check out www.oregonshedhunters.com

Antlers are used for dog chews, chandeliers, knife handles, beads, buttons and art. Common pieces are crated up and sent overseas. “The Asian market takes quite a bit,” Preston said. “They are used in homeopathic medicines and they believe that antlers have powers in them that do the same thing Viagra does.”

Joey Wood, of Powell Butte (www.antlerartandmore.com, 541-447-7979), started bringing home antlers 32 years ago. What began as a hobby has turned into a furniture business. Wood builds lamps, chandeliers and tables out of deer and elk antler. A single light fixture can employ up to 30 antlers. Wood buys antlers as well to get the ones he needs for building furniture and to fill orders for his new line of dog chews, Top Tine, made from A-grade elk.

The most valuable are non-typical, big, with drop tines, and ‘sticker points.’ If both sides are found – a matching set – those are the least likely to be turned into dog chews or aphrodisiacs.

Wood prizes a number of antlers that he and his wife, Mollee, have picked up over the years. One is an antler his dad found that measures a whopping 122 inches. Another shed in his collection is a miniature three-point mule deer antler that measures two inches tall.

Davis too has antlers he keeps because of the connection with the wild he gets from each castoff crown.

“Every other trip I take I usually find something special. Being out in the wild is the most important thing.”

Posted in Stewardship | No comments