When I laid eyes on the old gun last October, I asked if I might take it home and fix it up a little. 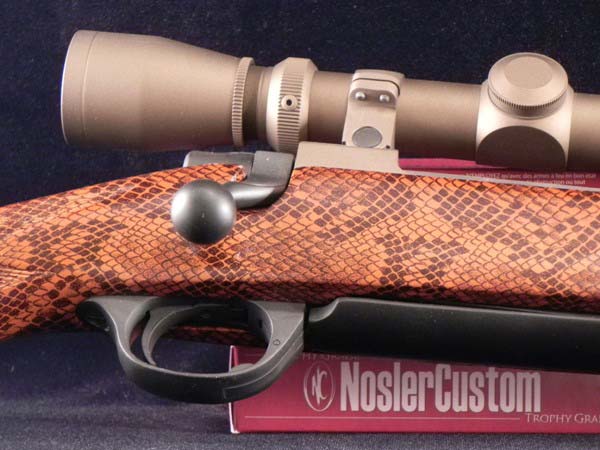 A rifle is a tool and like any tool, it can deteriorate if not protected from the elements. The plain wooden stock was scarred and gashed. Worn through its finish in a hundred places, it looked just like what it was, a ranch rifle, ready to ride in a saddle scabbard on a roundup of strays in the high country or reside in a rack in the back window, unloaded, a full magazine close to hand.

Knowing the Sandberg family, I had no doubt that Lee, with a moment to load and close the bolt, could apply a Ballistic Tipped projectile to any flea or tick riding a four-legged predator that prowled near the lambing pens. But a good working rifle should be protected. I relieved Lee of the truck gun with the promise of giving it a new lease on life.

Over the years, I have restored a few rifles, usually with sandpaper, steel wool and Tru-Oil. But this project called for a different approach.

Lee is not given to camo, he wanted a utilitarian finish. “Just make it look like wood, Gary,” he said.

Have you ever seen burl? Rare and expensive, it is used to decorate the interiors of high-end automobiles and trim out furniture. A rifle stock crafted from burl would be impossibly expensive, but a hydrographics transfer could apply the same look at a fraction of the cost and protect the rifle, giving it more years of use.

I took the rifle to Gene and Grant Hoskin, a father/son team from Redmond, whose company, HD Hydrographics (www.hdhydro.com), specializes in applications of camo, carbon fiber, wood, metal, stone and abstract patterns to just about anything you can think of.

First comes preparation. The Remington required more work than normal to fill in the pits and smooth out the stock.

The next project was a well-loved Colt single-shot 22, a rifle that has served several generations of first-time shooters. Accurate, reliable, dependable, the old rifle cried out for a new start. To this one, we applied a high gloss metallic gray finish behind a barbed wire pattern. The finished gun recalls frosty mornings on the high desert before the sun breaks through the fog.

For our final project, we opted for a complete makeover of a rifle I have carried on numerous hunts since the late ‘90s, a Ruger M77, chambered in 7mm Magnum. After hunts on Kodiak, in the Cascades and the deserts of southeast Oregon, the stock was scarred, the action pitted with the beginnings of rust. Internally, the gun was in great condition, outside the barrel and action showed signs of neglect.

With this rifle, I had taken my best Sitka blacktail, my best mule deer, my first elk and a great pronghorn buck. With the Ruger, my friend James had taken a six-point bull and several blacktails. Because the rifle recalls a dozen desert hunts, I opted for a rattlesnake skin finish and burnt bronze Cerakote on the barrel, action and Leupold scope. To the bolt and hardware, Hoskin applied graphite black.

Two other Central Oregon firms are licensed to provide Cerakote finishes: ArmorDillo, and Commercial Powder Coating, both of Bend. Five years ago, Commercial Powder Coating applied a sniper-gray Cerakote finish to my stainless steel Ruger M77 30-06. With a synthetic stock and a ceramic coat over stainless steel, that gun went with me to some of Earth’s harshest climates.

Ceramic coatings provide a degree of self-lubrication, superior wear resistance, excellent corrosion and chemical protection that will stand up to wear and weather, wherever the rifle goes next.

A rifle thus protected is likely to be hunting for decades after its original owner has traded in his saddle for a rocking chair.