It is well that rifle scopes are such marvels of engineering. There are but few hunters in this world that really know anything about the design and manufacture of the expensive tubes atop their favorite rifles.

Those of us who miss a shot from time to time have little experience with the grinding of lenses, the coating of glass, gas seals, lock rings and erector springs. Yet we can blame the parts in whole or in isolation when a bullet goes off-target. Our buddies are none the wiser.

The quick-witted hunter is as likely to blame a miss on his optics as on a bullet, the rifle or the conditions. Then he might employ such words as parallax or distortion or exit pupil. What does it all mean?

To make sense of the language of optics, it helps to define the basics parts of the rifle scope. Closest to the target is the objective lens. On the other end of the tube is the ocular lens or eyepiece. Inside we find a series of lenses that establish magnification, optimize light transmission, color rendition and prevent fogging and scratching.

The amount of area that can be seen through a scope is measured in field of view (FOV), usually stated in feet at a distance of 100 yards.

Inside the tube, the reticle or crosshair establishes the aiming point.

Adjustments to the aiming point are made by means of windage (left and right) and elevation knobs that are turned to fine-tune point of impact on the target. Some scopes are equipped with an adjustment for parallax.

Since circles are measured in 360 degrees, aiming point adjustments are considered in minutes of angle (MOA). A single minute of arc subtends about 1.05 inches at 100 yards. Hence, a rifle that is said to shoot minute-of-angle is capable of putting its rounds in a one-inch circle at 100 yards.

The magnification of a scope is defined by the power of the scope, as in 4X or 4-power, which means that the image will appear four times closer than it does to the naked eye. The diameter of the objective lens is measured in millimeters.

The hunter should pay attention to the rated size and magnification of the optic because of a standard called exit pupil which refers to the transmitted light available through the scope at the eyepiece.

To calculate exit pupil, take the diameter of the objective, which in our sample case is 36mm and divide it by the magnification setting, say 10X. That leaves us with an exit pupil of 3.6mm, which is less than the ideal of 5mm. If you are trying to make a long shot in the last minutes of legal light and the image in the scope is dark, dial it back to a lower setting to see a brighter image.

Thanks to great strides in design, it is possible for hunters to make shots in conditions that would not have been possible a few years ago. But even the best binoculars, spotting scopes and rifle scopes represent a compromise between price and performance.

As the optics have become more sophisticated, we hunters have learned a lot, but to most of us, the terms we hear associated with glass are optics voodoo.

We hear about ghosting, distortion, curvature of field, aberrations and parallax. What are these phenomena and how do they affect our shooting or the outcome of a hunt?

The Oxford American Dictionary, defines parallax as ‘an apparent difference in the position or direction of an object when it is viewed from two different points.’
Tim Gardner, the owner of Alpen Optics, described the arrangement of lenses in a riflescope that contribute to parallax.

On the opposite end of the scope, envision the reverse action.

Put your cheek against the wood and look into the scope. When you move your eye slightly left or right or up and down the crosshair, parallax may come into play.

“If your eye is on the centerline of the optical path there is no parallax. The trouble comes when you shift your eye off of optical center. If you see the crosshair moving off of the target, you have parallax,” Gardner said.

Many scopes are adjusted from the factory to be parallax-free at 100 yards. How important is this condition that we should pay attention to it? That was the question I posed to Darrell Holland, the inventor of the Advanced Reticle Technology (ART) system, a gunsmith and shooting instructor from Powers, Oregon. Holland considers a parallax adjustment necessary when a shooter uses optics at 14-power or above. The important thing, according to Holland, is consistent head placement on the stock.

Most high magnification scopes are equipped with parallax adjustments, which are usually mounted on the left side of the tube and can be dialed from 25 yards to infinity.

“Outside of the image itself being out of focus you’re not going to suffer any serious point of impact shift,” Holland said. “In target shooting, yes, the parallax adjustment at 400 yards might make as much as a 1-1/2-inch difference which could take you from first to last, but out hunting it doesn’t matter.”

Clearly, the current magnification craze contributes to parallax. Most hunting applications do not require more than 6X magnification. Varmint shooting is an exception, where magnification and parallax can make a difference on ground squirrels, prairie dogs and other varmints at distances of 200 yards to 400 yards and beyond.

“When you change the magnification you are actually moving internal lenses. When you turn the parallax adjustment, you are simply moving the image to be focused exactly on the reticle,” Gardner said.

I did not expect the dictionary to provide much help in the definition of ghosting, but there it was in the third category, ‘a duplicated image in a defective telescope…’

The primary purpose of the lenses is to transmit light. In the extremes of light and dark, ‘ghost’ or duplicate images may appear as well as glare and light flare.

When reflections occur in the objective end of the scope, a flare effect called aperture ghosting is the result. An example can be seen in any photo angled into the sun with ‘ghost’ light reflections in line across the image.

There is no qustion that better scopes are built with better glass and higher quality coatings. Darrell Holland’s ART reticle is installed in both Leupold and Schmidt and Bender scopes.

Think in terms of a prism. Different colors (or wavelenths) of light pass through the lenses and bend at different angles. Various types of glass and coatings are required to get each color in correct focus. Elements that are uncorrected end up as blurred images with poor color rendition and distortion.

“Chromatic aberrations are color-created distortions. All optical aberrations are caused primarily by curved lenses. You can’t eliminate them because when you make light go through a curved lens it is going to bend and the best thing to do is try to correct that by adding another lens to correct what happened in the last lens,” Gardner said.

“Spherical aberrations are where the images are distorted, especially when you get to the edge of the field of view. That’s where you find the most distortion and curvatures of field. It all has to do with light going through a curved lens. What tends to correct these things is the addition of more lenses.” And the scope gets a little heavier.

Our current enthusiasm for higher magnification has contributed to better engineering practices, but it comes at a cost to the hunter in the field.

Like the ability to hold still enough to see the image at long distance. And the image becomes darker as the available light (exit pupil) diminishes and the FOV narrows.

So put the sun at your back, get a good cheek-weld against the stock, dial your scope and adjust that parallax. The only ghosts we should see are the departing spirits of the prairie dog or coyote or mule deer. Given the advancements in technology and trend toward ever-increasing magnification, that is not so far out of reach. 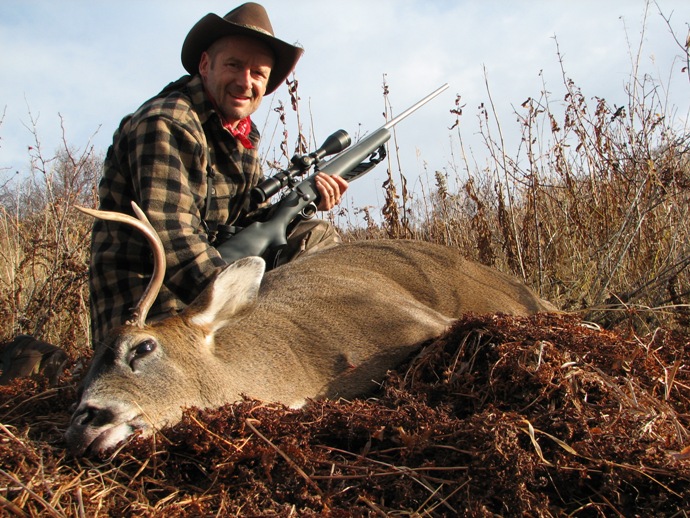