Cast and Blast on the River of No Return

Chukar and steelhead on the River of No Return

The Salmon River, Idaho’s River of No Return, divides some of the most remote backcountry wilderness in the Lower 48. Windswept ridges, steep mountain meadows and freestone creeks run down to the river. On any ridge you can hear the sound of chukar.

Riggins, ID, a fishing town with a population of 410, is the hub for trips that radiate out like the spokes of a wheel for steelhead and big game and bird hunts.

Sinclair has lived in Riggins for the last 15 years and has hunted chukar for the last 13. In his early 40s, Sinclair owns two German shorthairs. Hunts are conducted by truck from the road system and by jet boat and drift boat in the Salmon River canyon.

Sinclair guides between five and ten bird hunts a year and makes up to 20 hunts on his own and rarely hikes the same place more than once a season.

Chukar populations have cycled up and down in recent years, but Salmon River bird numbers didn’t seem as affected by the die-offs that happened in other western locales. According to Sinclair, Hunter numbers have increased in the last few years.

“With the home building in recent years in (nearby) McCall and Tamarack, I have definitely seen an increase in hunting activity in the last five years than in the last eight. But there is still a lot of ground that doesn’t get hunted.” Sinclair relishes looking for 'virgin birds.'

We fished the first day for steelhead and landed three before we retired to the lodge for dinner.

Dinner was held in the main lodge dining room and there was more than enough steak and potatoes, fresh vegetables and dessert for everyone. Breakfast was ample with two eggs, five strips of bacon each, as well as potatoes and fresh fruit.
Two hours after breakfast, we climbed away from the river.

Ike, Sinclair’s German shorthair pointed a covey of chukar in a narrow canyon and the birds flushed before we could get into position.

When we had climbed about 1,000 feet up from the river, Ike began to get ‘birdy’ again. Matt and my partner, Bill, were in position when a covey of 20 birds broke from the rimrock. We took two from that flush.

Sinclair said coveys were smaller this year than last. One covey we bounced had nine birds, while the biggest covey held more than 20. Once we figured out the level the birds were on, we worked sidehill through boulder-strewn rocky outcrops and across grassy slopes to pick up one more bird and miss several others. When Bill twisted his ankle, we began to work our way down to the boat, a long way below.

With Exodus, a standard full day chukar river drift boat trip for two people costs $215 per person. Guide, dog, lunch, snacks and beverages are included. Hunters will be able to access ground that is only reached by boat.

For the wing shooter that requires a less strenuous effort, Exodus and other area outfitters provide local drive-to hunts out of Riggins for about $215 per person per day.

Riggins-area jet boat outfitters can accommodate two to six hunters with guide and dog(s) for about $1100 for a one-day hunt. These jet boat hunting trips are offered in the Nez Perce and Payette National Forests. Exodus offers a premier trip into the Frank Church River of No Return and Gospel Hump Wilderness areas just upstream from Riggins with guide and dogs for $1175.

For a wilderness ‘cast and blast’, one day fishing and one hunting or two days hunting, Exodus offers the jet boat trip and a lodge stay at Mackay Bar Guest Ranch with all meals provided for $3700.

The 30-foot jet boat is powered by twin 460 Fords and equipped with a propane heater system beneath a large, enclosed canopy. Lunch, snacks, hot and cold beverages and fishing gear are provided.

October and November offer the best chance to fish and hunt on the same trip. Steelhead fishing runs into early December. After December, the river may be encrusted in ice and steelheading slows down.

Chukar are the main quarry, but California quail and huns may be encountered.

We stayed at the Salmon Rapids Lodge on both ends of our trip. The hotel is situated right on the river and is clean and upscale with all amenities, including breakfast for about $90 a night.

The nearest airports are in Boise (150 miles) and Lewiston (100 miles). At Mackay Bar, a long grassy airstrip makes the wilderness accessible by small plane.

A three-day nonresident hunting license ($35.50) allows the hunter to pursue upland birds and small game. A three-day nonresident salmon-steelhead permit costs $37.50. Licenses are available at sporting goods stores or online at https://id.outdoorcentral.us/. For information, or to request regulations, call 800-554-8685 or visit http://fishandgame.idaho.gov. The daily bag limit for chukar is 6 with 12 in possession and the daily bag for steelhead is 3 and 9 in possession.

For boat-based trips in the wilderness areas, there is a $4 per person per day Forest Service Recreation Enhancement fee to pay at the boat ramp prior to departure.

The chukar season runs October 1 through January 31. Early in the season the birds can be found near the river and mid-season at elevations up to 5,000 feet. Later, after snow blankets the high country, the birds move back down toward the river. 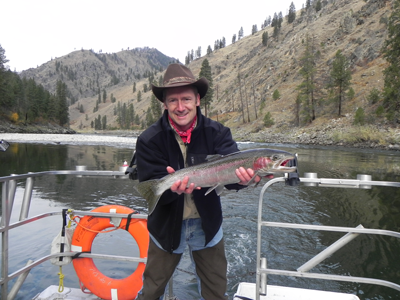