Again the intrepid caped figure of the Batman and his aide, Robin, the laughing young daredevil, team up to battle against that scavenger, that predator, that scale-less monster of the deep. Always outnumbered, but never outfought – two figures slug it out with the horde of halibut. Holy Flatfish, Batman! 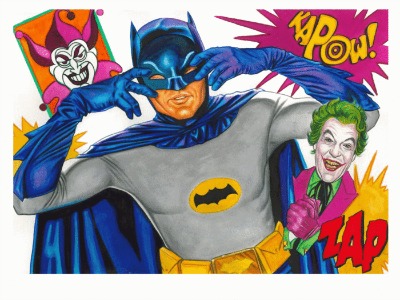 It is morning and anglers from around the world gather at docks all along the coast of southeast and southwest Alaska. Their adversary is hippoglossus, a creature of the deepest, darkest, depths of the ocean – a two-faced right-eyed flatfish, white on the downside and a mottled brown on the up-facing slab.

We call them halibut, their name derived from the words haly (holy) and butt (flat fish) for their popularity on Catholic holy days.

As fry, halibut have an eye on each side of the head and swim like other fish, but early in life one eye migrates to the other side and that side darkens while the bottom side remains white.

The fish becomes a bottom feeder that holds a place high in the marine food chain and high in the regard of two-legged fish-eaters. The flatfish feeds on crab, salmon, sculpin, cod, herring and just about anything else they can crush between their jaws. A worthy adversary for a crusader (caped or not) armed with a boat rod and a circle hook.

There are few secrets in the halibut in the waters off the coast of Alaska. A lot of excellent fishermen ply the salt to get their clients into the small fish we call “chickens” and the big old breeders that run 200 pounds and more, the so-called “barn door” halibut. When you head north to do battle and take fillets, heed the words of wisdom of some of Alaska’s best charter operators and guides.

Bob Anderson is the owner of Fireweed Lodge, based in Klawock, on Prince of Wales Island. From May to the first week of September, Anderson’s boats stream westward to the big water.

“The thing about the West Coast, from the shore out, there are halibut everywhere. When you want to target bigger sizes, you have to hit specific areas. It is about the configuration of the bottom and how it drops off and how the bait rolls into the holes and stacks around the pinnacles.”

We think of halibut as bottom feeders, scavengers, and they are, but they are also predators that chase down and kill their prey.

In their area, anglers are limited to one fish under 45 inches or one fish over 68 inches.

Anderson and his guides like to target the smaller, best-eating fish where baitfish gather. They hunt bigger fish in isolated spots.

“It doesn’t have to be in a big hole. Your big fish are often going to be in areas of about 140 feet deep. They tend not to travel in schools like the smaller halibut do.”

Anderson keeps track of the areas where the trollers have been working and throwing their cleaned fish overboard. Such places often turn up bigger halibut.

Mike Flores and his crew at Ninilchik Charters fish the waters of Cook Inlet and the Gulf of Alaska with a limit of two halibut per day.

“We look for breaks in the bottom, where the ground is downsloping or upsloping to pinnacles. The other thing we look for is bait. To find the bait, we look for whales on the surface and seagulls or cod and halibut on the fish finders that tell us where the bait is.”

Mark Edwards, of Naha Bay Lodge, often finds himself giving advice to fishermen headed out on their own. Edwards fishes southeast Alaska near Ketchikan in the West Behm Canal, Clarence Strait and Naha Bay.

“We are looking around for new spots all the time,” Edwards said. “I try to avoid going over the same spots all the time. I am looking for ledges around the 160 to 220 mark where we know bait is coming in. We know that the halibut are ambushing salmon. This year we opened up a halibut and found a whole salmon head inside a 64-pound halibut.”

Out on the water, fishing for halibut, an angler should be ready for rain. It is hard to predict the weather in much of Alaska. But in southeast Alaska, it is a little easier. It’s going to rain. Bring a rain jacket and rain pants. The good news is that a rain squall isn’t going to affect the fishing. What you can plan for are tides and currents that push piles of bait into rocky crevices where halibut feed.

To target the best halibut bite, try to time a trip to coincide with big tides. That means watching the moon. Some guides will tell you the moon doesn’t affect the fishing. Not Mike Flores. “When we have a full moon, we have a negative tide, which means we will have a 30 foot water movement in six hours. In the new moon, you get about 11 feet of movement. We get longer fishing time and better fishing in a full moon cycle.”

An impending storm and a major low pressure system will slow the fishing down, according to Flores.

“The fish are still there, they just are not biting. We have put Go Pro cameras down and watched the fish. We see them on the film, they’re just not biting at all.”

Hot weather and high pressure can slow the bite down for awhile.

“The fish are most active immediately after a cold front when everything has been stirred up,” Edwards said.

It takes years for a halibut to grow as big as a barn door and for every big one an angler hooks, he or she will sort through 40 or 50 smaller ones. Still, any day on the water, a fisherman has a chance to hook into a halibut that can tip the scales at 150 pounds or more.

Anglers know that the smaller halibut make the best table fare, but for sheer poundage and the battle, big fish are where it’s at.

Anderson and his guides like to protect the big halibut, the breeders, but when they do find bigger fish they tend to be in isolated spots and in places where a reliable food source is available. Conditions can play a part in the odds of finding big halibut.

“The average fish this year in all of Alaska was bigger four pounds,” Flores said.

“I think the best eating fish are the 20- to 60-pounders. You start getting bigger fish, the fillets are so thick you have to re-cut it to cook it. The older the fish, the grainier it gets. Myself, I keep 20-pounders to eat.”

“We generally use big 12/0 or bigger circle hooks with a good clump of bait or big scampi jigs,” Bob Anderson said.

Pete Eades is the manager of the Glacier Bear Lodge in Yakutat where the prime halibut season runs mid-May to the end of July when they switch to targeting other bottomfish and salmon. With a limit of two halibut per day of any size, guides for the Glacier Bear hunt halibut from their boat, the Aerofish. When an angler wants to hunt big fish, Eades says one of his favorite baits is octopus.

“It is very tough, it stays on the hook well. A lot of times when you see the big fish come up, they burp and you see octopus parts. We find a lot of octopus beaks in the bellies of big fish too.”

Herring is one of the most common baits. Anglers that don’t want to mess with bait can catch a lot of fish on big scampi-style jigs.

A fly-rodder can put big weighted streamers to work in shallower waters.

“You would want to start with a heavy sinking line that could get you to the bottom in about 60 feet of water,” Pete Eades advised.

Mark Edwards caught a 99-pounder while fishing with his family. “We were trolling for silver salmon at the time with a middle weight rod and 40-pound test,” he said. “It came off the bottom in 150 feet of water. We were trolling on downriggers baited with herring at 70 feet.”

Edwards found a salmon head in that fish. The big halibut came up 80 feet to feed, to attack. Just because we call them bottomfish doesn’t mean that they are always on the bottom.

Want to catch the most fish on the boat? Start at the back, Mike Flores said.

“For some reason the very back of the boat always catches the first fish. I think it is the scent trail. The fish come to you when they smell the bait.” And the first baits they encounter are the ones at the back of the boat.

Most charter operators and guides have a policy of rotating the anglers around the boat. So once you have had your turn, be nice and rotate.

“Listen to the captain,” Pete Eades said. “He knows what he is doing. We get a lot of people that try to throw their spin on it, what they know from fishing bottomfish in California and Oregon. It doesn’t work up here.” 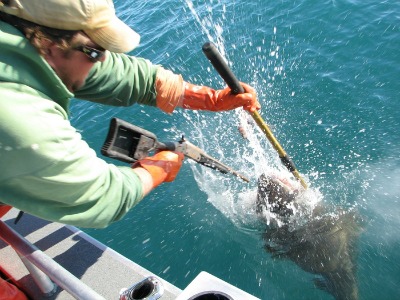 “There is no setting of the hook,” Eades said. “That is the hardest thing to teach people. You let them take it. It is a slow retrieve that sets the hook into the mouth. I tell people it is about patience, not a quick reaction.”

Mark Edwards said the number one mistake people make is they try to set the hook too early.

“The circle hooks do prove to be more effective. You have to wait. Wait till the fish is trying to head off and then start that progressive pull to the surface.”

Any caped or rain-slickered crusader that would do battle with the two-faced flatfish must go armed with a utility belt. Going guided, most of the gear will be provided, but an angler that shows up with a few essentials can make the captain’s and the mate’s or bait boy’s jobs easier.

First of all, a set of needle nose pliers like the FT6500CP from Coast or a multi-tool like those made by Gerber and Kershaw can come in handy for removing hooks from fish (and sidekicks).

For long battles, there might be a fighting belt aboard. Anglers of smaller stature might strap into a fighting chair to put maximum leverage and graphite to a fish.

On a guided trip, the crew will dispatch big fish before bringing them aboard. A gaff hook is standard equipment. A baseball bat can be employed to put the fish to sleep. BAM! For the biggest fish, some guides prefer a marine-grade 410 shotgun like the Rossi R45S while others will go with a stainless 38 Special to knock the bad guy’s lights out. KAPOW!

Mark Edwards doesn’t like to mix firearms and fishing boats so he uses a harpoon with a rope tied off to one of the cleats. “Throw the harpoon.” WHOOSH! “Stick him and let him run and then when you bring him in close, use the club.” WHAK!

If you bring a fillet knife, select a blade that flexes, but has rigidity through the mid-section for the best control. A pair of rubberized fillet gloves can protect the digits at the fish cleaning station.

When the quarry is in the cooler, a system for sealing and freezer packing the fish can be a work saver and protect meat for the long lockup. Systems are available from VacUpack and other manufacturers that make the job easy for a valued sidekick.

Icing down the fish and apportioning the catch into waxed boxes is best managed by oneself. Boy Wonder might talk a good game, but he cannot be relied upon when there are fillets to cut. And Catwoman cannot be trusted around the fish.


Back to Alaska Fishing »