The high alpine lake fisherman can be characterized as one of two types: the camper/angler and the one who hiked there for the fishing. We suspect you fall into the latter camp and you will excuse us if we do not name names or provide GPS coordinates for the lakes we fished last year.

Life is fragile up where the mountains meet the sky. A harsh winter or a dry, hot summer can severely impact the population of fish in a mountain lake. Too much pressure can hurt the fishing too.

Many of these waters are characterized by stunted brook trout and small cutthroats, while others may be home to a small population of big rainbows. Over the last few years, we have hiked into better fishing than can be found on many drive-to lakes. But who can tell at the trailhead? Will it be worth the climb?


According to the trail description on the web, this lake was "one of the National Forest's best-kept secrets." Another description read, "The fish here don't get large, averaging 8 inches."

We began to believe the first description after making two wrong turns that amounted to 15 more miles on washboard roads than originally budgeted. If we could just find our track, we could fact-check the length measurements.

Packing the truck, I forgot to include my detailed topo map. That was the mistake that cost us the extra diesel.

Over the state gazetteer, we huddled in the cab of the Ford and tried to make sense of a spider web of roads and canyons. Eleven-year-old Isaac and his dad, James Flaherty and my daughter Jennifer offered their observations and teams began to align. Isaac and I found ourselves in agreement, while Jennifer and James brought derision upon our decisions.

"It is probably our next left turn," I said with all the authority I could muster. I had said the same thing twice before.

Every other year, if they have the budget, our state's department of fish and wildlife stocks over 400 backcountry lakes with fingerlings dropped in by helicopter or transported there by hiker, horse and llama. Some of these waters are small and shallow while others are deep and cold. Some offer trophy trout, in others, the fish are small, stunted. Every lake is special in its own way. Some are well-kept secrets and others are well-used, even abused.

We located our road and, about six miles up the canyon, found the trailhead with six cars there ahead of us.

The path led uphill alongside a fast-running creek into a forest of old-growth; a half mile from the trailhead to the water's edge.

A few campsites were scattered amongst silvered firs. At the shoreline, the water was light green, darkening toward the middle. Talus slides entered the water on the south bank and high on the cliff clung stands of aspen.

If this was supposed to be a secret, this 20-acre lake on the shoulder of the mountain, I was going to keep it.

Isaac, armed with a spinning rod and a float and fly, managed a 30-foot cast over a submerged log. A trout streaked up out of the shadow and missed the grab. On the second try, fish and the boy connected. Isaac reeled in his first brookie, a speckled eight-inch former fingerling with a large head.

Rise rings dimpled the surface. I unlimbered my fly rod and waded in.

Shoreside trees were the biggest obstacle to distance. Even waded out hip-deep in the warm water, my back cast tickled the hemlock.

I guessed the fish were feeding on midges and caddis. One fish grabbed my olive caddis pupa, but that was it. I switched to a green chironomid but still the hungry fish shunned my offering.

A brown fly with tented wings landed on my sleeve so I dug through my box and located a brown tied-down caddis. Bingo. The brookies climbed all over it. Along the lakeshore, Isaac, Jennifer and James had connected the dots in a different way and each had tangled with multiple brook trout. We released close to a dozen and kept four for the fire.

In Washington and Oregon's Cascades, in the Rocky Mountains and in California's High Sierras and Siskiyous, hundreds of lakes offer good fishing for cutthroats, rainbows and brook trout. Some of these lakes are small and shallow while others are big, blue, dark and deep. Each has its own character and few of them can support much angling pressure.

On the lake we fished, the char were stunted from competition and a scarcity of food. There was probably a fish there that would have topped 10 inches, but we didn't see him.

Deeper lakes with a long shallow shoreline are better bets for bigger fish. The shallows act as a bug hatchery that nurtures trout. 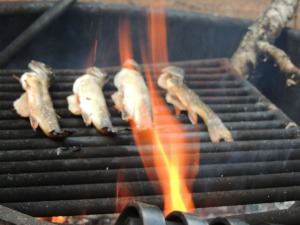 It takes a certain flexibility to unlock a backcountry lake's secrets.

Watch the surface, the bugs and the trout for cues. A lot of these lakes are timbered right to the water's edge and many are not wadeable; best fished from a boat. Pack in a float tube or rubber raft to get away from the bank. If you use a spinning rod, try fishing a fly and clear plastic bubble. The bubble will allow you to cast your imitation as far as a heavier lure. If you’re after larger fish, tie on a streamer.

With a spinning rod, the fly and bubble can be launched twice as far as the longest fly rod cast.

Casting bubbles are designed to be filled with water. A piece of surgical tubing or a hollow tapered peg attaches to plugs at both ends of the bubble. Pull one plug out and fill the bobber with water and then feed the fishing line through the center. Tie a swivel to the end of the line and then add a 30-inch section of leader with a fly on the end.

To match the hatch up there in the high country, miles from the nearest fly shop, bring at least a dozen different patterns to coincide with the possible emergence of caddis, various mayflies, damsels and dragonflies. The fly box should also be stocked with leech patterns, snails and minnow imitations as well as terrestrials: ants, hoppers, crickets.

Another good way to tempt trout is with pink plastic. I like to employ a five-inch plastic worm and cut it down to about three inches. Try this easy rig: Slide a bullet sinker on your main line. Tie on a barrel swivel then tie on a 40-inch, four-pound test leader terminated at a No. 10 red Daiichi salmon egg hook, then string the plastic. Trout tend not to chew this bait, they suck it in and spit it back out. Set the hook fast.

In the short growing seasons typical of most alpine lakes, trout don't put on the weight at the same rate they do at lower elevations. From the research we know that fish stocked as fingerlings take two years to reach legal size. Once a fish makes it into the 14- to 16-inch range, it might turn from eating insects to eating smaller fish and larger crustaceans.

In the West, some mountain ranges are dotted with little blue lakes full of possibility. To get specific recommendations, call fisheries biologists and check the state fish and wildlife web sites to see which lakes are stocked, even if on a two- or three-year rotation.

There are still places the crowd hasn't found, backcountry waters with trout that may go the whole year without seeing an artificial fly or a pinch of Power Bait. With the right fur and feather creation or a plastic imitation on the end of the line, an angler can bring a lot of fish to hand. Find a lake or a chain of still waters in some remote basin and you have found a jewel to keep or share with a friend or two over the years. It's worth the climb. 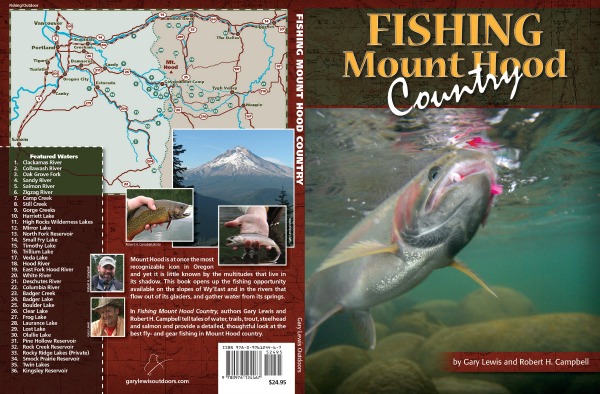