Camping on the Lake

It starts at the water line, the sun a smear on the horizon. In a small cove with a light rain on the roof, on a lake at the top of Minnesota, the silence at the edge of the wilderness seeps into our consciousness.

Our shelter we take with us, with miles of shoreline to tie to, we can base camp in a bay and fish all day long. Or not.

We like to think that we will fish all day long, but the urge to explore is too great to brush aside.

To learn the lake fast, we study charts, watch the wind and prowl bays with the depthfinder to look for sunken islands and schools of baitfish. We start each day on the hunt for walleye then switch to smallmouth in the afternoon and end by trolling for pike.

After lunch the first day, I throw a red and white popper with Cabela’s six-weight MTx fly rod. I splash the popper and when I chug it, a fish breaks water like someone has thrown a wheelbarrow in the lake. When the fish throws the hook, I get one glimpse; the bass looks as big as a Shetland pony.

Trolling for pike, when my rod bends with the weight of a fish, it is a 28-inch walleye with the 11-inch stickbait in its mouth. The sting of losing that big smallmouth is lessened.

That night, we deep-fry our walleye filets and relive the day’s bite on the deck.

After the operational briefing, Terry Sheely and I exchange glances. One of us must run the boat. My idea is to let him wear the captain’s hat. He thinks it would look better on me.

I win the first and only argument. “You can be the captain and I will draw the charts.” 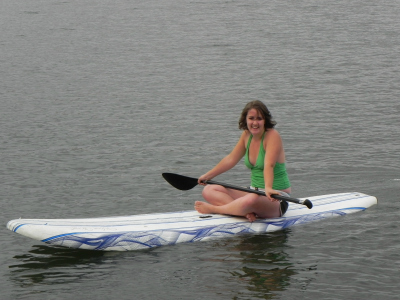 Meanwhile, the girls look to the gear and the games on board. Stashed on the stern they find a couple of paddleboards. With Sheely at the helm, we point out across the lake to our first moorage in a cove called Sunset.

On Lake Sacajawea, a half-hour’s drive from the Tri-Cities, our camp is a floating house that boasts 1,568 square feet of living space. Powered by twin 115hp Mercs, it is easy to start and run, once the art of feathering the throttles is mastered. On the second day, I tell my wife, Merrilee, to keep us in casting distance of shore and she takes the wheel for two hours while the wind pushes us down the bank. We even catch a couple of fish.

We tie up for dinner in a cove protected from the wind and the girls take turns on the slide and jump from the back of the boat to hit the paddleboard and sometimes they even land on both feet and skim away like pros.

Before dark we tie up to the dock at Fishhook Park where Sheely and I scrabble for nightcrawlers in the pools of our flashlights. The worms are faster than us, but we figure that makes sense at a place called Fishhook.

I find that one of the things that houseboat waters have in common is smallmouth bass. It is hard to find smallmouth waters more storied than Dale Hollow Lake, which holds the world record for a fish that tipped the scales at 11 pounds, 15 ounces.

Many people come to fish, but more people rent houseboats for the convenience of the mobile lodge and the base it affords for skiing or hiking.

Dennis Wilbert, the owner of Dale Hollow Marina, based in Celina, TN, advertises houseboats that range from 54 feet to 60 feet to 64 feet in length and can sleep up to 12 people. With the boat comes a map of the shoreline and the coves marked where a camper can tie up a boat for a night or a week. Most customers bring a boat, but the marina can also rent speedboats or pontoon boats by the day or by the week to give the camper nimble transportation to explore the lake.

At Dale Hollow, the surface does not freeze over and houseboats can be rented year-round. For anglers that want to ply the clear waters in the winter, the marina has a program they call Boatel, where the houseboat remains moored to the dock – a quiet place to camp, on the water and close to the best fishing.

Some reservoirs obliterate the landscape and leave no trace of the history and geology beneath the surface. Between the canyon walls at Lake Billy Chinook, it’s not hard to imagine the old river channels – the Deschutes, the Crooked and the Metolius and their confluence, now obscured by 4,000 surface acres and up to 415 feet of water.

With 72 miles of shoreline, the Cove, as the locals call it, is well-suited to hiking to birding and barbecues at sunset. Even on the busiest days of summer there are places where an individual can find solitude.

Gary Popp, the owner of Cove Palisades Resort & Marina, near Culver, Oregon, stresses the ease of operation of the largest houseboats. Orientation takes about half an hour. If the boater doesn’t have an Oregon boater license, they are issued a temporary card.

Water-skiing, wake-boarding and jet-skiing are popular at the Cove. Lake Billy Chinook is famous for bull trout and kokanee; fewer people target the abundant smallmouth. 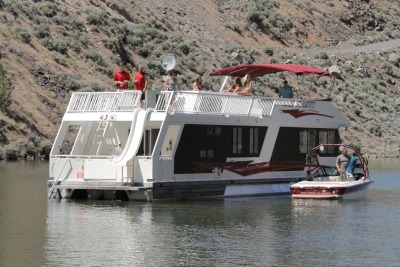 Cove Palisades offers houseboats to fit a budget as well as large luxury boats with hot tubs, suites and surround-sound that can sleep 15.

Inside the boat are the comforts of home and more, but the sound of the water lapping against the sides is luxury enough. Lay out on the deck and watch the stars turn round the sky. On a houseboat, serenity starts at the water line.

Back to Smallmouth Bass »