Beaver Pelts and Bobber-Doggin’ on the Umpqua

In 1832 the Hudson’s Bay Company built a fort that was to become the southernmost outpost of the fur company’s influence. From here the HBC controlled the trade for beaver on the Umpqua, the Rogue and the Klamath. And the beaver pelt became the medium of exchange until the winds of fashion in Europe changed.

There was a time on the river when to buy five fish hooks, glass beads or brandy or just about anything else you had to pay in beaver.

Jody Smith’s family has lived on the banks of the Umpqua since 1856. In fact, a distant relative, six-foot tall, blue-eyed Jedediah Smith, got into some trouble with the Umpqua people over a stolen axe, which, by my calculations would have been worth two beaver pelts in those days.

As we started up the river in Jody’s 24-foot jet boat, Jody pointed out the place where his ancestors raised the pigs they took to market way back when.

Winfield Durham sipped Sisters Coffee made with water from Central Oregon that I had carried over with us. Lyn Hocker put cured salmon eggs under a puff of yarn and Sam Pyke held his camera at the ready.

According to the weatherman, we could expect sunshine all day long. We kept looking for it, optimists all. “This fog is going to burn off in a few minutes.” “There’s a little patch of blue right there.”

We ran upstream to the rapids and Jody pointed us toward the best water. The rods were set up for bobber-dogging, a form of side-drifting that employs a float that rides up against a bobber stop to drag a “slinky” weight and 18 inches of leader among the rocks and hopefully among the fish we knew were there.

Last week, Jody said, another guide had helped his clients boat 24 steelhead. Another day, a guide got six. Someone had already landed a spring chinook. We could be right in the middle of a pile of fish or they could have jetted upstream.

On the drop since the last rain, the Umpqua was in good condition, steelhead green. Our confidence ran high.

“Cast about ten to 15 feet from shore,” Jody said. At the back of the boat, I cast first, followed by Hocker and then Durham. We watched the floats as Jody guided the boat backward downriver.

The point of bobber-doggin’ is to run a long drift with much more efficiency than a drift fisherman stationed on shore or anchored up against a riffle. On every drift, we covered at least 200 yards of water and often much more.

Yes, our bobbers dipped and bounced and several times looked like fish had taken the bait. Once, Lyn reeled up a ten-inch coho smolt and let it go. “Catch you later.”

Then the rains came. Still, the screen on Jody’s smart phone told him it was sunny. To me it looked like a low pressure system had moved in while the weatherman wasn’t looking. We wished the weatherman was with us, although we didn’t have an extra rain jacket for him.

Low pressure systems aren’t good for fishing, but Jody is nothing if not hard-working. The shades of his ancestors that rest in the cemetery on the hill would be proud of him.

At lunchtime, we anchored up and switched to Tadpolly plugs in a spot that Jody’s grandfather had learned to catch salmon.

“I have never, ever been skunked in this spot,” Jody said. Great.

I ate my roast beast sandwich and watched the sky. At 1:20, the sun broke through and I looked at my watch. Ten minutes, I told myself, and we’ll get a fish. It happened eight minutes later. Lyn saw it happen, the rod buried almost all the way to the water and, through a mouthful of sourdough and turkey, he called fish on. The fish broke for mid-river and we had to follow it.

When I had gained most of the line back, we saw it, long and silver in the water, a steelhead with an intact adipose. This was a fish descended from the fish that those first pioneers hoped to catch when they traded one pelt for five hooks. Here, just over 40 miles up from the ocean, the nickel bright fish had turned our otherwise dreary day on the river into a memory.

Late in the afternoon, Jody beached the boat and we walked up to the fort, a replica of the one that burned on a November day in 1851.

Out in the river, silver-sided steelhead made their way upstream to their ancestral spawning beds. Among the willows on the riverbank, I saw where a beaver had cut and dragged small trees to make a den.

You can put a price on fish hooks and after some days on the river, a gallon of brandy is worth ten pelts. But every steelhead is a gift. 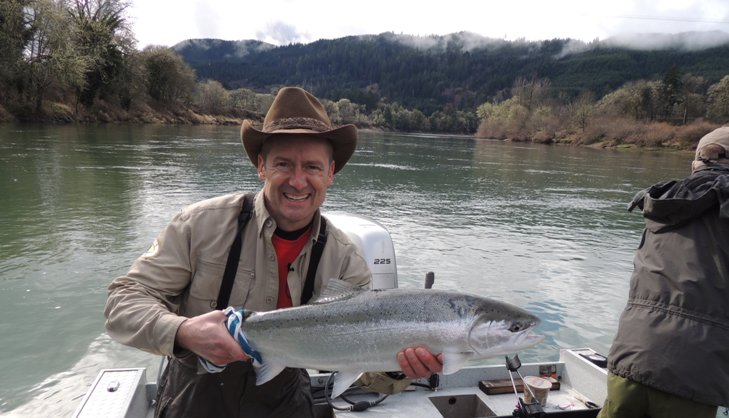