When unlooked-for books show up, I put them aside, unexpected gifts, to sit on my nightstand until I have processed my need to read them, or at least escape.

Steelhead rivers have always been my escape and that is why I was drawn to a book called Steelhead Fly Angling with the subtitle Not your grandpa’s primer on how to catch steelhead.

“To be successful in any endeavor - love, career, athletics and fishing - you had better have a good plan,” writes Michael Gorman, guide and OSU instructor in his new book. Agreed. A novice steelheader needs to adopt a plan and mindset, to find a system. In the first chapters, Gorman identifies the obstacles to success and shows the way through failure to a better understanding of oneself and an ocean-going rainbow trout.

Throughout 184 pages filled with full color photographs in a large format book, Gorman examines the nuances of wet fly and dry fly swinging for steelhead, as well as nymphing. He goes into deep water to examine our attitudes with tongue-in-cheek sections titled Shame on You, Satan Created the Strike Indicator, Got Religion? and Can’t We All Just Get Along? He wraps with an answer to the Absolute Moralist, “Shut your pie hole unless someone asks you.” 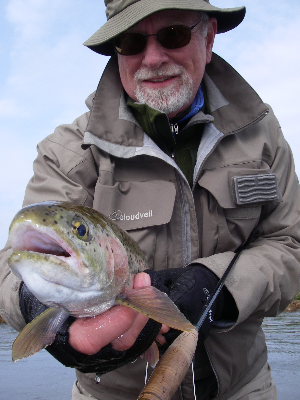 If you are a fly-fisherman on a quest to catch your first steelhead on a fly or your next one, look for this title from Frank Amato Publications. This author, who I have never met, I consider a kindred spirit, somewhat of a steelhead snob with an attitude, a system and an outlook. He ends the book with a note on those he calls cowboys with frozen fingers and rain dripping down their necks.

“And every now and then, their rod tips will be bent hard against a magnificent fish that others would not, could not, and should not catch.”

One of the more prolific scribes of Oregon waters is the award-winning author of nine books and the creator of westfly.com, a web site for western fly anglers. Scott Richmond migrated from high technology to a lifestyle of words and water. We know Richmond from such titles as Fishing in Oregon’s Best Fly Waters and Fishing Oregon’s Deschutes River.

It took me a few days to get used to the fact that he had a novel in print. Then I escaped to the river between the pages of River in the Sun (www.4riverspress.com) a thriller set in Maupin and on the Deschutes.

Such a book is suspect from the start. How will the author get me to suspend my disbelief with a story set in a canyon I know well?

He cleared that hurdle with a character forced into a crucible with a shattered family life, a job as a hack CIA operative, shadowy terrorists and a cover story that makes him a would-be author of a fishing guidebook.

“Why would a rational person fish this way? Why do anglers put so much effort into something so rare and elusive?”

Richmond examines the reasons we fish. Some “see a survivor that has been through dark water, that has risked all to go beyond what it was. When their fly line goes tight, the connection is not just the eighty or one hundred feet to a steelhead: it goes deep into the sea and touches every place the steelhead has been, everything it has seen, all that it knows about survival.”

Richmond’s novel is billed as three love stories with a thriller core, but there is also the thread of a love story for fly-fishing and steelhead. Through it all, the characters are swept on the currents of the times like drift boats through Whitehorse.


Steelheaders are often misunderstood by those that have never felt the tug on the swing of the fly. We do not understand ourselves most of the time. Richmond’s book provides a glimpse into the reasons we fish.

A rainbow trout becomes a steelhead when it leaves its home water on a journey that takes it to the ocean and an uncertain future. There is a big difference between that steelhead that goes to sea and its cousin, a rainbow that stays home. The ways we fish for steelhead are different from the ways we fish for trout.