Almost 4 million shad passed through the dam at Bonneville last season. If you weren't there to meet them, you missed out on the hottest fishing of the year.

Shad have been in the Columbia River since the 1880s and the run topped 1 million fish in 1978. Most anglers are so spoiled now we don't fish until the count hits 40,000 fish a day. That usually happens between the fourth week of May and somewhere in the first week of June.

If there is one difficult aspect to fishing for these slabs of silver fury, it is finding a rock to stand on.

Try to get there early in the morning or after the first wave of fishermen have filled their buckets, usually about 10 o'clock.

The fish run 16 to 24 inches and the biggest might tip the scale close to eight pounds. Most shad run in the three- to four-pound range.

Shad are good to eat when filleted and cooked or canned properly. That's why, in the most popular spots, families can gather enough shad to last the year.

Go with light tackle. Six- to eight-pound test line and a slow-action rod make a good combination. Small spinners and spoons such as the Dick Nite and others can be trolled or allowed to hang in the current. Use enough weight in fast water to take the lure close to the bottom.

A red-headed jig with a white or yellow body is a popular option for prospecting in fast water. Other colors to try include, pink, blue, chartreuse, gold, and silver. Shad like small baits. On bucktail jigs, trim the tail close to the shank of the hook.

Another effective technique is to run two or three beads on the line above a bare hook. Put a brass-plated sliding weight up above the swivel to attract more attention and drop your bait into the strike zone.

On the retrieve, try to crank the reel handle at less than half a turn a second. Shad don't like to chase the lure.

Shad seem to hang up at ledges and drop-offs, obstacles on their upstream run. Look for fast runs where the current forces fish close to the shore in water that runs about four to ten feet in depth. The shad will be in the seam inside the main current. Since most of the fish will be close to shore, long casts are not necessary. 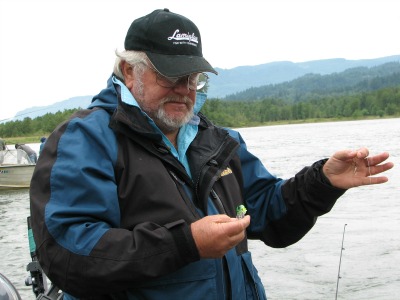 The most popular fisheries are from about 25 miles below Bonneville, up past The Dalles to the John Day Dam.

A lot of anglers congregate in area below Bonneville Dam. There is good access below the dam from both sides of the river.

To get away from the crowds, head upstream. The John Day fishery kicks into high gear when the count over the John Day Dam reaches 10,000 fish per day, which usually happens after the second week of June. Below the John Day Dam, the Oregon side of the river usually produces more fish than the Washington side.

Back to Sturgeon and Shad »