A couple of weeks ago, I ran into my uncle Jon and he told me he had just bought his first shotgun. I reminded him that he had owned a shotgun once before.

In fact, we bought our first shotguns when we were teenagers. I remember our first pheasant hunt and Jon remembered too. We both winced. Seventeen roosters flushed that day and we didn’t hit a one. I asked him if he was a better shot now than we were back then.

He said he actually shot the new gun pretty well. Breaking targets with a shotgun is all about how the shotgun fits and a shooter’s hand-eye coordination. It comes natural when the shotgun fits.

What doesn’t come natural is how to behave when you get invited on an upland bird hunt.

The sport is bound in the tradition that followed Europeans across the pond and evolved on these shores. We hunt chukar, partridge, pheasant and quail behind flushing or pointing dogs. We don’t take easy shots on the ground, we let them fly, let them have a sporting chance.

A week or two weeks before your hunt, go shooting and get familiar with the shotgun you will use on the hunt. Learn how to load it properly and how to handle it safely.

Don’t show up in camouflage. Camo is for big game and turkey hunting. On an upland hunt, you want to be seen. It’s a safety thing. Upland bird pants or chaps are a good idea and a bird vest with orange panels allows your fellow hunter to see you and keep everyone safe while swinging on a bird.

Don’t hunt on your own. Again, it’s about safety and working together as a team. Whether there are two hunters or half a dozen, stay in line, maybe ten yards apart and don’t get too far ahead or too far behind. Be ready for some give and take. If a guy is walking slow, wait for him. If the dogs are working slow, let them. 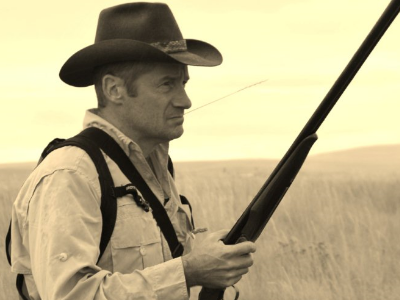 Expect to be surprised by a bird. Sometimes the dogs miss a pheasant and you almost step on it. If a bird flies directly over the line of hunters, pivot like a basketball player and keep the muzzle pointed skyward all the way through the turn to make the shot going away.

We hunted Horseshoe Bend Ranch near Klickitat, WA, last weekend, a preserve operated by Blaze Outdoors. Jack Young brought his Brittany, Beau, and Bob Mulligan fielded Lady, a German shorthair we hunted over south of Tucson a few years ago.

These dogs were great, but that isn’t always the case, which brings me to the next rule. Don’t yell at your friend’s dog. It doesn’t matter what the dog is doing, don’t command it, scold it or even make a suggestion. If you have to talk to the dog, praise it. And always trust its nose.

Don’t complain about the birds, how hard they fly or how few there are. In fact, keep your talking to a minimum. If a dog goes on point, signal to the other hunters with a wave of the hand. Birds get nervous when a small army closes in on them. The more noise you make, the less likely they are to stick around for the dogs to sniff them out.

If a dog is on point, his nose locked on a pheasant in a bush, walk in with the muzzle of the gun pointed toward the sky. Keep the safety on until the bird is in the air and wait until there is open sky beneath the bird before you shoot. If the bird flies low over the dog, or over your companions, hold your fire. You can always mark where the bird goes down then go after it again. There is no bird worth scaring your friends over or sacrificing their hearing.

If more than one person shoots at the same bird, don’t claim it. There is nothing more annoying than the guy that yells, “That one’s mine,” after every shot. Let someone else assign the bird to you.

At the end of the hunt, if you outshot everyone else, don’t take all your birds, divide them equally. If someone doesn’t want their share, that’s okay, as long as the people who do want them get to take birds home.

There are a lot of variables on an upland bird hunt from the weather to your companions to the dogs they bring along. The one thing you can control is your attitude. After the hunt, thank your host and give the guide a tip.

Like any complex sport, no one expects you to get it right the first time in the field, but if you pay attention to the mostly unspoken rules of upland etiquette, you can assure a second invitation.

Oregon’s regular bird hunting seasons have closed, but the preserve season allows hunters to take to the field for chukars, Huns, pheasants and pen-raised quail. Licensed preserves are open for hunting through the end of March.