Zorro and Poncho in the High Not-so-Lonesome 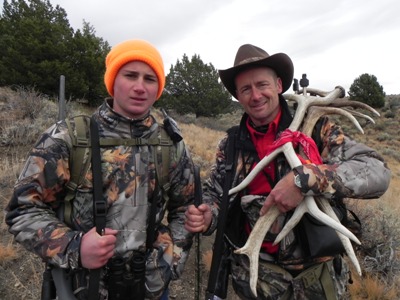 It was the only tree on a windswept plain. I ducked my head under a branch. James Flaherty, watching my heels, weighed down with most of a mule deer on his back, didn’t.

The 300-year-old tree extended a rapier-pointed limb and carved a zigzag scratch on the lucky hunter’s forehead. Henceforth, we called him Zorro.

That evening, 16-year-old Paxton Eicher stalked a buck on a bitterbrush-studded bench. The forked horn caught his scent and made a getaway.

With rain coming, we tarped, roped and Rhino-Gripped our tents to keep as much water out as possible. Paxton had left his rain jacket at home. I handed him an emergency plastic poncho. If he wore it, I could give him a nickname too.

Then came the rain, 13 hours of it that rattled our blue-tarped roof like the sail of the Good Ship Lollipop. In the morning, I cut a hole to let the water out. The boy who would not be called Poncho shivered out the morning on top of Where’s Waldo Knob.

Black pressure-flaked chips of obsidian glinted from the desert floor. We walked the trails of hunters of long ago and traced tracks left by wagons when the road from Ontario to Burns ran through this rocky land we call the Beulah Unit.

Our other hunter, Lance Powlison, a Desert Storm veteran, began to show the strain. He had forgotten his sleeping bag. Every night he put on his coat and slept on his laundry, each morning his eyes more bloodshot than the day before. He might have taken the truck to town, but a roundtrip to Burns would have taken seven hours out of a hunting day.

One morning, a buck gave me a broadside look at 697 yards. The math said the bullet would drop 138 inches. My Darrell Holland-built Remington and Leupold Mark 4 ART could make the shot. If it had been a steel plate on a target range I would have taken it, but it was a deer made of flesh and blood.

That afternoon, the same buck presented a broadside shot at 458 yards, too far in the low light.

In the morning, we found the tracks of the deer we had watched the day before. I looked uphill to see Lance step over a downed barbwire fence. It bounced up, caught his toe and sent him sprawling. Lance’s tumble did not go unappreciated. We called him Spinner.

Spinner and I jumped a solo buck in a patch of mountain mahogany, but saw no more than its legs through the low trees as it bounced to safety.

In a grove of junipers, I spotted ivory-tipped tines that protruded through the duff and picked up the left side of a six-point elk’s castoff crown. I held it up for Zorro to see then we continued south along the ridge.

I stopped. What happens when a bull drops an antler? He wants to shake the other one off. I turned around and stalked back. In two minutes I held a matching pair of six-point elk sheds.

It was day six. By this time in seasons past, most of the other hunters had headed for home. But every day we counted other hunters in the landscape. I don’t resent them, hunters are my favorite people, but I was surprised to see the present level of dedication among the fraternity.

We met one fellow with a tall-tined four-point strapped behind him on a four-wheeler, a tremendous deer, unlike the bucks we had spotted lo these many days.

Zorro and Spinner made conversation with another pair in an ATV. Coated with dust, they reported traveling 200 miles of these roads and had counted close to 200 deer, not one of them a buck. Their rifles were strapped to the roll bar, ready should a buck dash across the two-track.

I wished success for each hunter, in their careers, in their love lives and golf games. I found myself thinking we need to lower their taxes so the economy improves and they can get back to work on a schedule where they hunt opening day then scoot back home.

My amigos needed a deer camp attitude adjustment and the best thing for it was a coyote hunt. We had heard dogs howling every night. Perhaps one or two would come to a call.

We still-hunted a patch of bitterbrush on another ridge. At dusk, the shafts of sunlight illumined ranchlands and a lake ten miles distant.

I had exchanged the Remington for my other rifle, a Winchester Model 70 formerly owned by my friend Ed Neff, given him in 1968 by our mutual friend and mentor, John Nosler. In the chamber, I had bolted home a 150-grain Nosler Partition that had, according to the box, been hand-loaded by Neff in 1979.

We low-walked over the skyline to sit in the shadow of some bitterbrush. The boy who would not be called Poncho sat beside me, Spinner and Zorro just up the hill.

To start, I blew a series of jackrabbit squalls. Two minutes later, I raised the intensity. On the third sequence, Poncho joined in and we staged a jackrabbit duet. Any moment, I expected to see a coyote bounce out of the sage.

Instead of a coyote, a herd of deer appeared two hundred yards away. All thought of coyotes vanished. The first two were bucks and the second two were does. I verified the biggest with my binocular, verified again. They were nervous, ready to bolt.

The buck stepped ahead. Cheek welded to wood, I told myself to hold low to compensate for the angle. When the bouncing crosshair settled, the rifle spoke. The buck stepped forward and the crosshair flicked across its throat as my finger tightened again.

Mule deer bounced away through the sage. Sure of my shots, I walked up on the deer and found it stretched out in the sand. Four of us set to work to pack the meat out in the dark.

It was a mile back to camp with no trail through the basketball-sized rocks. We followed a north heading then stopped to consult compasses and GPS by flashlight. When two out of four of us could agree it was time to turn at a right angle, we turned to drop down the hill through the boulder field back to camp.

It was my turn to make dinner. All week I had told my partners about the treat they would get when I fixed nachos. It turns out that when you make nachos on a campstove, the tortilla chips burn on the bottom of the pan.

My friends deserved better than they got. And they knew it. I thought I had escaped camp without having a moniker applied, but I found out later that mi compadres had bestowed a new nickname on me – el Jefe Furioso – the Angry Chef.