Gutsy. Every day, Mikayla, my 16-year-old, greeted the rain with a smile. She had heard me say deer hunting is better when it’s wetter. Best of all, she believed me.

For the last two days, we stalked blacktails on burned-over slopes and in brushy tangles. Every day we were up well before dawn to put on our boots and shrug into rain jackets. We saw plenty of does. If we saw a buck, it was on the move and it was either too dark in the morning or too late in the day.

I began to wonder if we could make it happen in the time we had left. Jim Harris was quiet. He had taken time off work to help us try to spot a buck. It was hard for him too.

We walked out a road behind a closed gate. Mikayla loaded three rounds into her 7mm-08 and closed the bolt on a hand-loaded Nosler AccuBond.

On the shoulder of a ridge, we made a sneak through a patch of poison oak. For a few minutes, we watched five does in the bottom of the canyon, then we began to make our way to the hill top. We paused to glass the brush below. Then I heard a red-tailed hawk, except it wasn’t a hawk, it was Jim Harris.

He held his fingers on both sides of his head like a buck then pointed into the canyon.

Mikayla and I scrambled to the edge of the canyon, on our knees in the tall grass. Two does bounced down the bottom of the canyon and behind them, a buck, his head held high as he cleared a log then vanished into a stand of poison oak. Out of sight, he turned down a ditch and emerged in an opening. He sailed over a fallen oak tree, stopped and looked back.

A bit less than 200 yards, I guessed. On any shot with a steep up or downhill angle, the trick is to hold a bit lower than normal. If Mikayla held halfway up the body, she might blow the shot. I held my breath.

The gun was sighted to hit 2-1/2 inches high at 100 yards. To hit the heart, she would have to hold lower than normal for a horizontal shot.

With the buck broadside on the other side of the downed tree, she thumbed the safety, let out a breath and squeezed. At the shot, the buck ran headlong down the hill.

Fifteen minutes later we found him. Mikayla ran ahead. 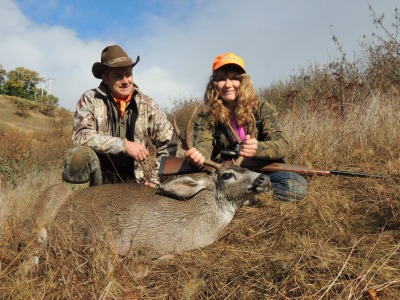 “He’s beautiful,” she breathed. His hair was slicked with rain, his tall, forked antlers shiny, flecked with mud. While we turned her trophy into winter meat, the rain stopped and the sun appeared from behind the clouds.

Two days later, on the drive home, I asked her, "Where did you hold the crosshair on that buck?"

"Oh,” she said, “you told me how the gun was sighted high and to hold low if I was shooting downhill. I didn't hold on the buck, I held on the top of the log."