The city of Prineville, Oregon, lies east of the Cascades, a three-hour drive from Portland. Known as the Gateway to the Ochoco mountains, Prineville sits at the confluence of Ochoco Creek and the Crooked River. With agricultural lands up and down the Crooked River valley, the river draws waterfowl out of the Pacific flyway to winter over or stop for a few days.

“One of the reasons I like this spot is it’s a pinch point. We get birds coming in out of Prineville to the east, Lone Pine, Powell Butte, Terrebonne and Crooked River Ranch.” Alex Sackerson, 37, is the owner of Prineville, Oregon-based Predawn Adventures, an outfitter in his second year of business. Sackerson makes his living from September through the end of January as a waterfowl and uplands guide. During the rest of the year, he works in landscape maintenance and as a butcher.

Oregon offers the opportunity for hunters to go afield during an early September goose season. This, and the September dove season mark the first hunts of Sackerson's season, which continues through the end January. Because some of his properties have good numbers of wild pheasants and valley quail, Sackerson offers limited hunts for upland birds. Turkeys? He doesn’t like them, so he doesn’t guide turkey hunters.

We hunted with Predawn Adventures on a spring-like day in the second week of January. Although the weather didn’t feel like duck hunting, the birds were flying. This hunt offered the possibility of a bonus goose or two, but the resident honkers stayed high above the river. Ring-necked ducks, a few wigeon and teal streaked through, bank-high over the decoys.

Sackerson scouts the birds the day before the hunt to choose the best place each day. With seven leased properties from which to choose, he can move around dependent on where the ducks and geese want to be.

We hunted from a blind situated on the south bank of the Crooked River. Other possible options included ponds and small lakes on private property higher up the valley.

The blind was spacious enough to accommodate up to four hunters, our guide and his four-year-old chocolate Lab, Reno.

Ducks landed in the decoys and then flew out before legal light. Minutes later, the first flight of seven streaked down the river, low over the decoys. 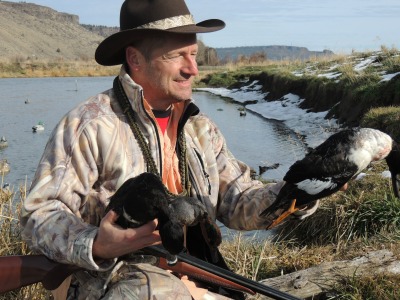 Habitat restoration in the lower Crooked River valley (see our report on Duck Creek Outfitters from 2013) has improved waterfowl numbers in the region. Mallards and teal are common in October; wood ducks are not uncommon. Later in the year, there are more wigeon and gadwall. A diversity of divers makes this an interesting hunt: ring-necked ducks, buffleheads, bluebills, goldeneyes and common mergansers make up the mixed bag. Goose hunters will see a lot of Canada geese, greater white-fronts and a few snows.

Oregon's migratory game bird seasons begin with the opening of the September dove hunt. To target resident Canada geese, the state opens a nine-day season that begins the second week of September. In 2013, the daily bag limit of geese was five and the possession limit was 15 in all Eastern Oregon zones. Check the 2014-15 Oregon Game Bird Regulations (available in August) for changes.

Duck season usually begins the first Saturday in October and may run into December with a brief closure and then opens again to run through the third week of January.

For a half-day hunt, Sackerson charges $150 per hunter. A full day costs $300 per gun. Youth enrolled in Oregon's mentored youth hunter program can hunt for free (maximum one MYHP child per trip) with a paying adult. Juveniles who have hunter education and a hunting license can hunt at half the adult price.

We found Sackerson to be an adept caller, and like a lot of waterfowl guides, an enthusiast of the sport with a love for getting up early and watching the sun rise. He was good at identifying birds on the wing and had his eye on the clock to make sure no shots were taken prior to legal light.

On a hunt with Predawn Adventures, Sackerson does not provide lunch or drinks. If you need it, bring it. Early in the morning, we met at a convenience store where it was easy to pick up waters, sodas, candy bars and other necessaries.

Hunters from out of the area have a number of low-cost lodging choices in Prineville and Redmond. One possibility for accommodations is Brasada Ranch (www.brasada.com), an upscale golf course community with swimming, tennis and spa facilities. The city of Prineville (population: 9,173) offers several restaurants. The larger communities of Bend and Redmond are 20 minutes and 40 minutes from Prineville.
Travelers can fly into Redmond (RDM) and rent a car for the 20-minute drive to Prineville. All services are available in Redmond and Prineville.

For the non-hunter, birding, hiking, climbing, wildlife viewing and photography are available at Smith Rock State Park. Through the end of October, fishing is good at Prineville Reservoir and Ochoco Reservoir.

An Oregon 3-day nonresident hunting license ($26.50) allows the hunter to pursue waterfowl (and upland birds). A federal waterfowl stamp is required. Licenses are available at sporting goods stores. For information, or to request regulations, call 800-720-6339 or visit www.dfw.state.or.us.