Specks and Snows in the Klamath Marsh

When I opened the door it hit me, not the scent of the dairy, in the marsh east of Klamath Falls, but the decay, the yellowed orchard grass and the mud.

Darren Roe opened the trailer and we shrugged into huge packs of decoys and deposited them on the ground fifty yards away. There was snow on the marsh, more snow on the wind.

We set the speckle-belly decoys in a semicircle with snow geese among them while Darren set up a flock of 'socks,' lightweight decoys made of plastic material that bounced in the breeze.

Since it was a Saturday, we were joined by 10-year-old Ethan Roe, dressed in waders and bundled against the cold. He dragged decoy bags and adjusted decoys as we put them into play.

Lew Lemon and Kyle Ramos, hunters from the Sacramento area, were along for their last fling of the season. Like us, they'd had the 2:40 wakeup call at the lodge at the Running Y Ranch and now they stepped into Darren's boat. We eased through the shallow water among the tules and seeded the marsh with more decoys for a plastic flock of 200 counterfeit birds.

When we returned to the blind, my shotgun was underwater. In its case, it had been on top of a chair, but when the chair blew over, the gun went in the drink. I brushed off the new Weatherby autoloader, thumbed two rounds into the tube and closed the chamber on a third.

Silhouetted against the dark sky, the tules towered overhead. We hunched into our island in the marsh, just 40 yards out from the decoys. 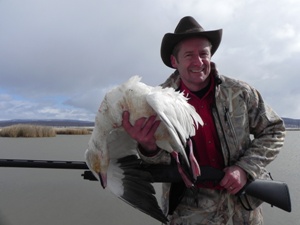 In the Klamath Basin, they call it the spring goose season, but technically, it's a late-winter hunt, focused on snow geese, Ross and greater white-fronts.

There are hundreds of thousands more white-fronted geese than called for in the management objective. Snow geese are just as numerous. In late winter and early spring when the farmers' fields are starting to show green, the birds hit the winter wheat, alfalfa and orchard grass. ODFW biologists use hunters to shift crop damage pressure from private lands to the refuges in the Klamath Basin.

Darren stowed his boat and walked back through the knee-high water. Georgie, the Chesapeake, took her place next to Darren and Ethan.

"Guys, guys, guys, load your guns," Darren hissed. Five speckled-belly geese flew in out of the south and made a high circle as they checked out our spread.

Known as the greater white-front, they are also called specks for their black-speckled bellies. They have an understated beauty with a brown head and a white forehead. Their wings are dun-colored, their tails banded, dark green, black and orange.

Not as big as the Canada geese Darren calls "heavies," greater white-fronted geese tip the scales at about six pounds with a wingspan of 53 to 62 inches. In flight, they move like Canadas with rapid beats of their long, pointed wings. Their call is a distinctive bark that sounds like a laughing 'kla-ha' or 'kla-hah-luk'

"Don't look at them," Darren whispered. Their second pass was lower, they cupped their wings and banked into the wind like they were climbing down a shifting staircase, out front, over the open water.

"Take 'em. Take 'em!" The first one sagged and the last one crumpled and the rest put on the brakes and wheeled. Georgie charged out into the dark water and brought back our first birds of the day, two speckled-belly geese.

Darren smoothed out the feathers of the first bird and started talking about garlic, butter, orange sauce and red and yellow peppers. "We call the specks the "flying filet mignon."

Other groups of birds passed by overhead. We heard the crump of guns from the next property. Two snows showed low in the sky out of the southeast and on their second pass, we dropped one in the water and one in the tules behind us. Georgie shouldered through the reeds and returned with snow on her back and a snow goose in her mouth.

We watched skeins of honkers against the sky and hooted to swans that circled over our decoys. We added to the bag of specks and snows, but the bird I will remember best was the lone speck that cupped his wings over our decoys in the middle of the morning.

We fired four guns, three rounds apiece and missed him clean. Pathetic. Beautiful. He caught a gust of wind. With our guns empty, we watched him wheel and fly out of range, encouraged back to the refuge where he belonged.