Into the Wilderness for a Backcountry Bull

Now, not as lean, not as mean, but still a Marine, 71-year-old Barkman wanted to hunt elk in the wilderness. His neighbor and friend, Karl Findling, would help.

Growing up in Michigan, Barkman didn't hunt elk until he moved to Oregon in his late 50s. Elk eluded him.

Two years before, Findling and Barkman had packed into Hells Canyon, but Barkman had not been ready, physically or mentally. When he had a chance to close the deal on a spike bull, he missed. The experience haunted him.

In June, Barkman and Findling drew second-season bull elk tags for an early November hunt. Findling, a Bend fireman and owner of Oregon Packworks, doesn't take his elk hunting by half-measures. They would work all summer to get ready, pack in by boat and on foot and they would stay 10 days.

Through the summer they hiked and their packs grew heavier. Sessions with the rifles included long range shooting, uphill and down. Then came the first setback – hernia surgery. Findling thought Barkman's doctor would call the trip off, but Barkman kept training. In October, the pair made three big hikes with 60 pounds apiece on their backs.

On a Wednesday in early November, they put their raft in on the Idaho side of the Snake River and floated down. To reach the area they planned to hunt on the Oregon side required an elevation gain of 4,500 feet.

"There were places where I had to go on all fours, grabbing handholds of grass to pull myself up," Barkman said. They completed the climb on Friday, another four hours, and the temperature dropped ten degrees for every thousand feet up.

Here, the wind blew, at speeds of 30 and 40 miles per hour. Snow whipped their faces and caked their boots. The second morning dawned clear and cold. At night, the mercury dropped to 15 degrees and never climbed above freezing the rest of the week. Barkman lost a toenail and had frostbite on all the fingers of both hands.

Saturday, the season started. "Our plan was to let the other hunters down by the river drive the elk up," Barkman said. "But there weren't any other hunters. After five or six hours I was done for the day. The elk stayed down below. They didn't come up."

It was Sunday when the hard work began to pay off. They hunted along the ridge, parallel to the river with steep cliffs that dropped down into steep valleys with small, grassy meadows, protected from the wind. Karl saw three cows go over the ridge.

"We decided to follow them over and see if there were any bulls with them." Two hundred fifty yards away. "There were four cows and a spikehorn," Barkman said. "We set up and used the rangefinder and I told Karl I don't want to shoot a spikehorn. Let's just wait and see what happens and if anything else shows up."

That was when Karl saw the tips of a bull's tines over some rocks, not far off.

"I couldn't tell if he was on his feet or bedded," Findling said. As they watched, the six-point bull moved out into the open, broadside.

Barkman snugged the rifle into his shoulder, thumbed the safety, took a half-breath and squeezed. The bullet lanced the bull and he turned around to offer a second shot.

When he threw the bolt for a second shot, the gun didn't fire. Pull, push, tap, aim and fire. That's what the instructors drilled into him at Camp Pendleton. He hit the bull again and it went over the cliff, rolled 40 feet and lodged in a patch of elderberries. The fall broke one antler in three places and while Barkman worked on the meat, Findling looked for, and found, the missing headgear, including one four-inch chunk of antler.

It was more like bighorn sheep country. We were using trekking poles and were grabbing onto the hills to get handholds to pull ourselves up," Findling said. 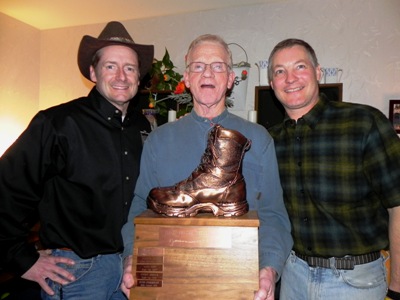 They were three miles from camp and the hard work had begun. Over the next few days, they moved meat, moved the boat and moved camp. At noon, on the last day, Findling connected on another six-point bull and there was yet more meat to cut and pack.

"Russ wasn't ready for the cold. I was amazed that he could do this at 71-years-old, things he hadn't done since he was a Marine. I think it was the adventure of it that kept him going," Findling said.

"I probably won't be able to do that one again, because by the next time I draw a tag I'll be 76 years old, but I've been hunting since I was 8 years old and I'm not going to quit now," Barkman said.

Each year we present the High Desert Backcountry Outdoorsman trophy to one Central Oregon hunter who doesn't quit when the going gets tough. This year's winner is Russ Barkman.