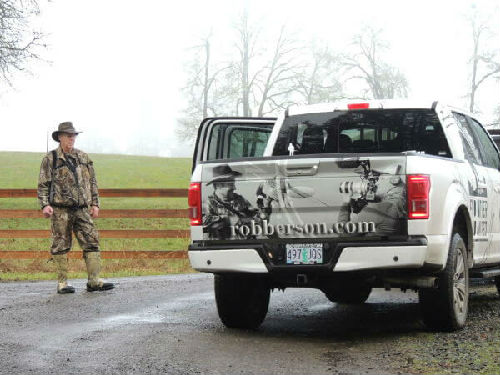 What a winter! Now it is March, the first day of spring and the snow is (almost) behind us. If you were to ask me the name of the F-150 Lariat in the driveway, I’d tell you I call it The Blizzard.

For the first I don’t remember taking it out of 4-wheel drive. At one point we had 33 inches of snow in our yard. Out in the street sometimes I pushed snow with the bumper. But the thing that defined the new truck experience for me was the hunt, in February, when dad and I drove to western Oregon on a hunt for Roosevelt elk. 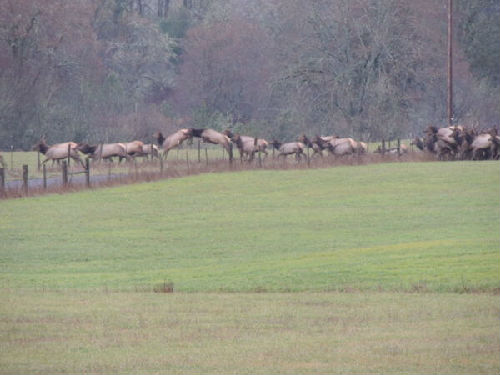 It was dad’s tag, his first hunt for elk. To get there we had to cross the Cascades, which for most of the winter, was a dicey thing. On this truck is solid, sure-footed even with the standard street tires that came with it from the factory.

In the truck at we crested a hill, headed west, in our hunt zone now, and met the property owner at a crossroad. Thirty minutes later, we were on foot, ghosting through dark timber.

On the air came the scent of elk. There were close to 80 in the herd, cows, calves and a spikes, raghorns and one good branch-antlered bull. We hunted for one cow with bad feet – with hoof rot. In the we could see the animal, but it wouldn’t separate from the others. There was no way to get a shot without endangering another animal. We backed off and continued to monitor the herd throughout the day. In the afternoon we tried again.

The elk bedded in a stand of trees and once again we stalked close – this time to bedded animals while the wind was in our favor. The elk with bad feet did not show itself.

We tried again on the second day, but the suffering elk offered no shot. Instead, Dad found another cow elk in the crosshair and sent a Nosler Partition out to do its work. The landowner had several more damage control hunts scheduled behind us and would continue to try to find the cow with hoof rot. 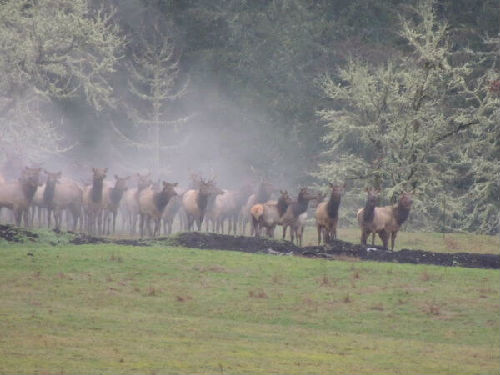 It was the work of an hour to skin and quarter the animal. We loaded the quarters in the Blizzard and headed home to Central Oregon, back through snowy mountain passes and out into the high desert.

One moment stands out in memory: a herd of elk streaming across a meadow and leaping a fence to cross the road, jumping another fence. Eighty on the run up a long hill. They stopped on a bench high above the valley and looked back, the sweat off their bodies, creating its own fog bank over the .