Thirty-two feral sheep worked away into the junipers. A black ram with a full curl of horn stepped out from behind a tree. Instead of coming up our canyon, the sheep fed through the sage and bitterbrush and over the next ridge.

"That black one is a good one," Todd whispered. "There's a buckskin-colored one in the group too, but I saw a white ram. That's the one we're looking for."

This was Todd's ranch and this little patch of ground close to the river was the home territory of a band feral mouflon-cross rams and ewes. Over the last couple of years, Todd had reduced the size of the herd to provide more mule deer habitat.

I carried a Ruger M77 that started life with a stainless finish, but was now sporting sniper gray courtesy of Commercial Powder Coating in Bend. On top, it wore a Leupold Mark 4 equipped with Darrell Holland's ART reticle.

From the top of a ridge, we watched them through branches of the bitterbrush as they slipped into the third canyon. If we pushed them again, they would stray onto the next ranch.

Higher we climbed, around a rocky outcrop. I slid into position with the limbs of a bush to break up my outline.

Todd whispered, "There's the white ram. He's going to come out in the open."

It was downhill, about 160 yards. If I hit it poorly it would bolt onto the next property. If I hesitated, I might not get another chance.

Zeroed at 100 yards, the crosshair drifted back along the spine. When the ram paused, I set the reticle on the base of the tail and thumbed the safety to 'fire'. When the bullet struck, the ram dropped and the rest of the herd bounced up the canyon, white, black and tan shapes streaming through the junipers.

Throughout the state there are huntable populations of feral sheep, goats and swine, animals descended from herds that were turned out for hunting purposes or that escaped from farms. The greatest concentration of hunting opportunity lies in central Oregon. 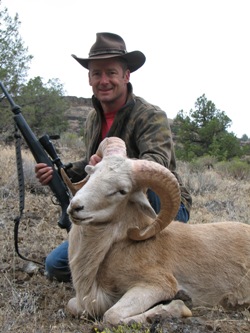 According to Corey Heath, an ODFW wildlife biologist in the Prineville office, the first feral sheep were released near Crooked River Ranch in the 1960s. The animals populated the Crooked River canyon.

"Most of them are mixed blood, with mixed genetic lines so they fall under agriculture rules as domestic livestock," Heath said.

There are at least two herds in the John Day watershed. Although ODFW considers them livestock, Steve Cherry, a wildlife biologist in the Heppner District calls the feral sheep a threat.

"The research shows that they are. We have had bighorns living around those Service Creek mouflons. They aren't doing as well. It could be based on disease issues or it could be that the habitat isn't the best bighorn habitat."

But the feral sheep are a potential carrier of pasturella, which is known to be fatal in wild bighorns.

"I have to remind people they aren't managed by ODFW," Cherry said. To hunt feral sheep, hunters should have permission from the landowner as well as from the owner of the livestock. "Just because it is on public land doesn't mean they can legally shoot it." 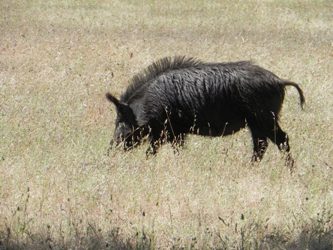 Feral swine are listed as one of the 100 most dangerous invasive species in Oregon. According to Rick Boatner, ODFW's invasive species wildlife integrity coordinator, Oregon is at a crossroads relative to this animal classed as invasive predator.

"There are two main populations of feral swine that we know of. One along the California border and another in central Oregon, a little south of Madras, north up to Maupin and east to Condon and back down roughly to the Prineville area."

Boatner thinks it may be hard to eradicate pigs in southern Oregon. They come in from California, a state that boasts between 200,000 and 500,000 animals. They gave up trying to control them long ago.

"Now, California has pigs in every county but one. In the 1950s they had about 5,000 pigs in eight counties. We are at the spot they were in the '50s. It's a pivotal point and we can go either way right now."

Boatner is reluctant to estimate the number of wild hogs. "It's hard to get estimates on them because they go nocturnal and they're so good at hiding and they don't take pressure."
To keep track of the animals and find out where they go, a few pigs are radio-collared.

"One pig with a collar on it heard us start our ATVs and ran eleven miles. Another pig we have collared, her home range is 10,000 acres."

"Hunters by themselves can't shoot enough to make a difference," Boatner said. But baiting is legal and dogs are legal.

Hunters can help. In fact, the Oregon Hunters Association has provided money for trail cameras and trapping programs and other efforts. OHA recently awarded $3,060 to ODFW to provide traps and technical assistance to assist in removing feral swine from properties in Wasco, Jefferson, Sherman and nearby counties.

One of the best tools is a rifle in the hands of a good shot.

"They are tearing up the riparian zones big time," Boatner said. "That affects the forage for deer, elk and antelope which reduces the carrying capacity of the land, and also promotes invasive weed growth. So far we haven't found any, but pigs carry 35 known diseases, thirteen of which can be transmitted to humans."

They eat everything from acorns to alfalfa, to rattlesnakes and bird's eggs. And they multiply. Starting at six months old, a sow can produce piglets at the rate of two litters per year.
"If hunters see damage or see pigs, I would like to have that information," Boatner said. He can be reached at Rick.j.boatner@state.or.us. "If hunters want me to give them a place to hunt, I can't help them though. And I used to keep a list, but it ran to over a thousand names."

"Most of the pigs we know of are on private property and right now we have no landowners seeking assistance from the public, but we are running into some trespass issues." The animals move on and off of the BLM land and some hunters have connected by being in the right place at the right time.

One place where hunters might find pigs on public land is in central Oregon.

"We believe there are populations in the northwest Ochoco National Forest, northwest of Prineville and southeast of Ashwood," Boatner said.

Landowners are obligated to keep watch.

"If a landowner or manager knows there are pigs on the property they are required by law to contact ODFW and start a removal plan. If we have funds, we loan traps out and implement other tools," Boatner said.

Too many Oregon oinkers have made the jump from farm to feral. Call him swine, wild pig, predator or pulled pork, he is a cagey quarry. But he is out there. You can hunt him year-round and there is no limit.