Going by the numbers, I logged 650 miles and spent two rainy days and half a sunny one in the field to bag my gobbler last year. I shudder to think of the dollars per pound I had invested in that organic free-range bird.

Looking back, it was no surprise to me to see we worked a little bit harder for our spring gobblers last year than in past seasons.

According to the Department of Fish and Wildlife, Oregon turkey hunters tagged 3,860 toms in the 2012 spring season. Oregon’s best Meleagris gallopavo habitat is in the southwest corner of the state. The top producer was the Melrose Unit with 391 birds and an average 3.93 days of hunter effort, .43 birds per hunter and .11 birds per hunter day.

South on Interstate 5, the freeway takes the hunter into the west side’s second best bet for a spring gobbler. The Rogue Unit, Applegate, Evans Creek and Dixon units offer some of the best turkey hunting in the state.

It was interesting to compare harvest data from 2011 and 2012. There were fewer hunters in the field last year and we had to work harder in some of the best units to tie a tag on a bird.

The McKenzie Unit saw a marked increase in harvest with 169 spring turkeys for 471 hunters, up from the previous year's harvest of 87. Either there are more turkeys now in the McKenzie Unit or the Eugene and Springfield hunters are staying closer to home. Keep an eye on the McKenzie Unit and the nearby Siuslaw Unit, which saw a harvest of 30 more gobblers last year with fewer hunters in the field.

With a total bag of 302, the White River produced the second highest number of birds of any Oregon unit, but the birds-per-hunt-day ratio was lower than the Melrose Unit at .05. Because of its proximity to Portland, I guess, White River gets hunted harder than anywhere else. Last year, 1,512 hunted there, down from 1,870 the year before.

Other top units east of the Cascades are Murderer’s Creek, Ukiah, Heppner, Wenaha and Sled Springs. 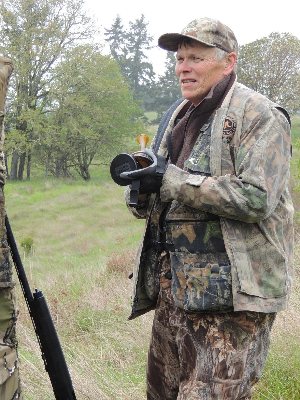 A hunter based in Bend and Redmond has choices. Between Bend and Maupin, bird numbers run one to five per square mile. Yes, you can find turkeys close to home but you are going to work at it. Eighteen gobblers were tagged in the Upper Deschutes Unit last year. Harvest in the Metolius Unit dropped off in a big way, either as a result of winter-kill or because fewer hunters went afield.

A better option is to head east. Even with fewer hunters, the Ochoco Unit saw more birds harvested for less days in the field.

Looking across the state, one thing to keep in mind is that bigger units can post higher numbers than smaller ones by virtue of the real estate available. A savvy scouter can focus on pockets of good ground in units like the Imnaha and Walla Walla on the east side and, west of the Cascades, in the Alsea, Trask and Powers units.

Turkeys are relative newcomers to Oregon and we are likely to see interesting population trends play out over the next couple of decades as they adjust to the habitat. The Willamette Unit is one of the better turkey producers and so is the Santiam, both of which posted better harvest numbers than in 2011. That means Portland-area sportsmen don't need to drive as far as they used to.

Oregon’s turkey season runs April 15 through May 31. The daily bag limit is one male or one turkey with a beard. Hunters are allowed two turkeys for the season, except that a third may be taken in some counties. A separate tag is required for each turkey.
If you took the year off from turkey hunting in 2012, you might get a tag again and split the cost of gas with someone. Put in at least three days in good habitat and cross your fingers that you get a few sunny afternoons in a row. It’s a long season, and there is more than enough time on the calendar to make the odds work for you.