A Tale of Three Takedown 22s

Out in the flatlands east of beyond, the shoots of green grass are shouldering through the stubble. Down in their dens, the Belding's ground squirrels are astir. It won't be long before sage rats are perched atop their mounds in the spring sunlight.

There are a lot of ways to deal with this pest of the agricultural pivot, this inhibitor of harvest, this purveyor of plague, but the most sporting method is with a rifle, a rest and a box of rimfire ammunition.

Early this year, I laid eyes on Ruger's new 10/22 Takedown, a packable version of America's favorite rifle. Even as I placed the order, another takedown 22 was headed my way. This one from a friend whose late brother had owned it.

My friend put the little Savage 1903 pump-action gun in my hands. It had a crescent-shaped steel buttplate on a brown walnut stock, a box magazine in front of the trigger and a slim wooden fore-end beneath an octagon barrel. On the tang, it wore an aftermarket peep sight in case a guy had to make a long shot.

A suitable number of greenbacks was handed over and I took the little gun home. Only then did I think to check the bore with a flashlight. I was happy to see a gleaming mirror finish that belied the rough exterior.

How many boys or girls called that Savage, now more than 100-years-old, their first gun? How many squirrels or cottontails or grouse were collected for the pot when times were hard? How many kitchen doors did this gun rest behind to be employed in a snap shot at a thieving raccoon or a coyote in the chicken coop?

I set it inside my safe alongside a Marlin 39A lever-action 22 rifle manufactured in 1946. When I handle either one, I know they have been passed from hand to hand over the years.

The lever-action Marlin came my way in a similar exchange. Its owner needed a couple of hundred dollars more than he needed a rifle. This one wore a Weaver J2.5 scope that looked the same vintage as the rifle.

When the Ruger arrived, I couldn't help but lay it alongside the other two. Three fine small game rifles from different eras, all made in America. They share an uncommon trait: they are all takedown guns.

A takedown has the advantage that it can be stored safely away from the hands of the untrained or untrustworthy. And it can be carried in a truck without taking up the space a typical long gun commands.

The Ruger 10/22 Takedown arrived in a nylon backpack-style case. To put the gun to work, the barrel assembly is inserted into the action with a right turn of about 45 degrees and a bit of inward pressure. An adjustment knob is finger-tightened to lock the barrel in.

The challenge for Ruger engineers was to build a rifle that would stand up to years of use and still put bullets on paper with the consistency we are used to. I wanted to see if they had hit the mark.

Atop the rifle, I installed Warne Scope Mounts and a Trijicon 3-9x scope. At the COSSA Park on Sunday, I had to try three different loads before I found the most accurate. But when I punched the target with CCI Mini-Mags, I could have covered the five-shot group with a dime, accuracy worthy of a trip to Eastern Oregon when the alfalfa is two inches high in the fields.

At the range with two 16-year-old girls, before I let them shoot, I explained that this type of rifle, which is best used for rabbits and squirrels, could be banned under legislation in consideration in Salem. 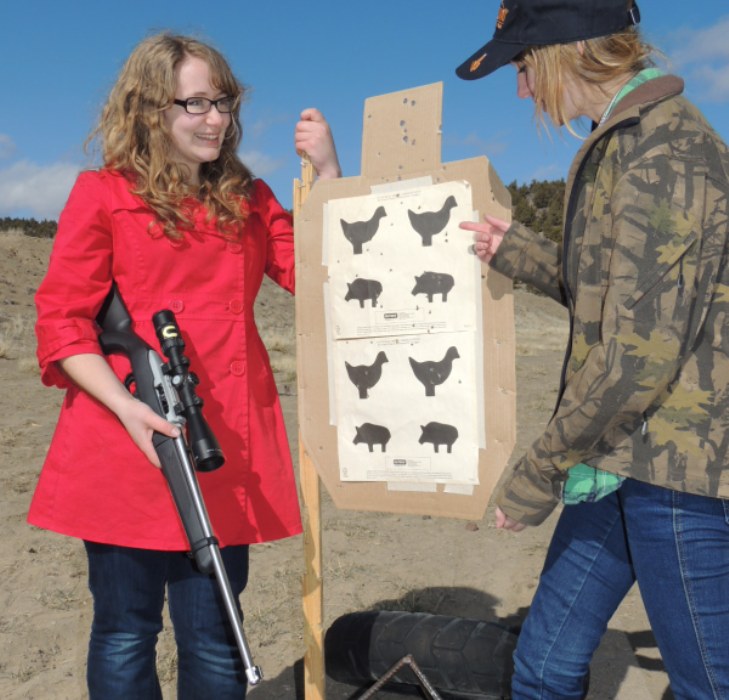 Semiautomatic rifles are not assault weapons. The term came into vogue in the 1990s but is properly applied to a World War II German machine gun. The Ruger 10/22 went into production in 1964 and more than 5 million have been sold. For some people, it is the only hunting rifle they own.

I suspect there are more 10/22s in gun safes in our state than any other gun. What makes the 10/22 the preferred tool of so many small game hunters? It is affordable, cheap to shoot and reliable. A hunter with 500 rounds of 22 Long Rifle can keep disease-carrying varmints at bay and protect hay, alfalfa and other crops from destructive rodents.

As I look at the calendar, I foresee spring trips to places like Crane, Christmas Valley and Dairy, Oregon, where ranchers need some help keeping critters at bay. I plan to take the Ruger, but I will put the Savage and the Marlin to work as well. I know a few kids who are looking ahead to their first hunts. These guns ooze experience which is the best teacher of all.