Sage Rats from the Second Story

In case you haven't noticed, the price of everything is higher than it used to be. We can't blame inflation because the government's economic indicators tell us that inflation is low.

But consider the price of gas for example. We are now burning in our tanks, a fuel blended with corn, a substance we formerly called food or, if we gave it to cattle, feed. That has caused the price of both food and feed to increase.

Perhaps you have noticed that ammunition (when you can find it) is quite a bit more expensive than it used to be. Again, it is the law of supply and demand at work.

Orchard grass and alfalfa are another type of supplemental feed for livestock. Alfalfa is high in protein and is easily grown in our climate. The trouble with alfalfa and orchard grass is the company it attracts.

Belding's ground squirrel is a creature of the high desert, an animal that, in uncultivated conditions is not likely to grow out of balance. When a squirrel leaves the rural environs and moves into a large acreage of alfalfa, he can find so much grub he will never have to look for a meal again. Then he invites all the relatives and they tunnel down to build vast apartment complexes beneath the green.

According to Dave Malott at Central Oregon Ranch Supply, alfalfa is running $14.99 for an 85-pound bale, while orchard grass is going for $12.99 a bale. The price varies according to demand, as well as supply.

I wasn't the only one with my eyes on the feed this week. We met the owner of the property we were hunting early in the day. He encouraged us to stay all day if we could and shoot as many sage rats as possible.

We rolled into the fields at Dairy, Oregon, pulling a trailer equipped with Roe Outfitters' Varmint Extermination Unit (VEU). On the first level were three shooting benches; a fourth shooting bench was located on top, with an uncommonly good view.

Down on the ground level, the sage rats scurried back and forth in the groceries. Our first field was in orchard grass. Darren Roe parked the VEU and set the jack stands. We uncased our rifles.

Rex Allison and his boys, Ethan and Trevor, would start with bolt-action 17-calibers and progress to semi-auto 22s, while Dan Goetz and I would shoot Ruger 10/22s and Colt Competition ARs with Warne scope mounts and Leupold optics. We used standard capacity magazines that would hold 20, 25 and 30 rounds.

In keeping with the theme of supply and demand, I focused on economy and waited for the biggest and boldest rats that stood tall in the green grass.

One study showed that a single sage rat will eat 14.55 pounds of alfalfa between green-up and the first cutting in June. 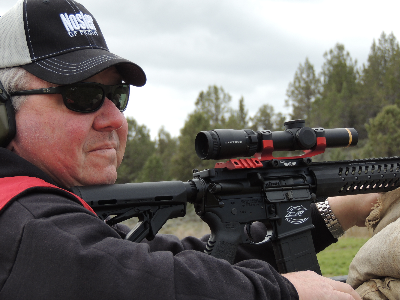 The sage rat is an eating machine and when they are not eating, they spend their time making more sage rats. Females give birth to a litter of five to eight pups, which are sired by multiple males.

They eat the above-ground parts of the plant and then mound over the crop with dirt as they burrow. Farmers often damage their machines on the mounds, the burrows lead to loss of irrigation water.

It was easy to see where the squirrels were making a living. Their runways were worn to bare earth and their mounds stood six inches above the tops of the grass. One field was so burrowed, I thought we might fall in.

We figured we could keep the price of tractor repairs, turf and T-bones down, with well-placed shots.

After 125 rounds through the Ruger, I switched to my CZ 17 HMR and then to the homegrown Colt Competition. The rifle was built in Canby, the scope mounts were made in Tualatin and the scope was made in Beaverton. And the bullets, Nosler's Varmageddon Ballistic Tips, were loaded in Bend.

Most shots came in the 50- to 75- yard range, but when the closest critters had their heads down, we reached out to 200 yards and beyond. As the day warmed, the wind picked up and the Ballistic Tips proved the best projectile for use at long range.

According to the math, we saved 2,401 pounds of livestock fuel. I will be going back out to help ease the demand before the first cutting of hay. There is a lot more to do. Ask for your savings in the meat department. No need to thank us, we enjoy the work.