Upon deplaning in Kodiak City, the first thing the traveler sees is a 1,400-pound brown bear in taxidermied attack on a blacktail deer. The tableau inspires awe in every newcomer. 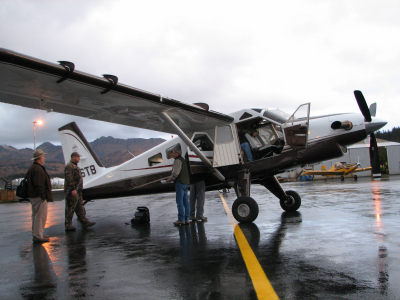 This is the background against which a vital piece of advice is shared with the novice Kodiak hunter. "When you get a deer down, a bear is going to get a meal. Leave the gut pile, grab your deer and drag it away as fast as you can. Go fast and the bear gets the gut pile to eat. Go slow and the bear takes your whole deer."

Or worse. A month before our hunt, a hunter had been killed by a bear a few miles from where we were headed.

Three days into our hunt I found myself alone on a ridge in hip-deep snow. There were two deer across the canyon, headed into a thicket of willows. The one in front was a doe and behind trailed a buck, his neck swollen with the rut. Through my 7x glasses I could see his antlers were wider than his ears.

In those days few people carried rangefinders and I didn't have one either. I hoped I could judge the distance. This might be the only shot I'd get.

The wind howled off the mountain, left to right. I sat back in the snow, snugged the butt of my Ruger 7mm Magnum into my shoulder, wrapped the sling about my forearm, rested my elbows on my knees. Uphill, cross-canyon, in the wind, this would be tough.

It was. I missed several times.

Now with one bullet left. I waited for a dead spot in the wind. The buck stood head-on and I centered the crosshair on his brisket. Suddenly the wind stilled. I squeezed the trigger.

The buck began to move, head down and crashed through a patch of brush and came out the other side, where it dropped in the snow. I shook a little now that the shooting was over. This was what I was here for, this long-anticipated moment.

Then the old deer hunter's advice played back. I had rung the dinner bell.

I cut the trail and followed the tracks to where the buck lay. Quickly, I gave thanks for this deer whose meat would feed my family. Afternoon sunlight was slipping away.

I set my pack, coat and rifle down, slipped my knife out and moved to make the first cut. That's when I heard it, something coming fast. The willows began to shake and I felt the beast in the ground beneath my feet. Close now.

I stepped back, away from the deer, ready to defend my life with my blade. The unseen attacker was already upon me.

Then the ground began to roll. It was an earthquake, not a bear. Four-foot swells rippled through the crusted snow.

The next day, the report from Anchorage crackled across the boat's radio, the epicenter was just a few miles from where I had stood on that ridge, knife in hand. The earthquake measured 7 on the Richter Scale and had triggered a swarm of aftershocks and quakes in the Katmai volcano field.

Shaken and stirred, I called it a warning.