Pig Central: On the Hunt for Feral Swine in Old California

You don't have to hunt for very long before people start telling you about great hunting places. These are what are known as wild goose chases. It is easy to fall for them, but you never know until you go. My friend Tim Rose called this one Pig Central and it was central all right - Central California.

We were five hours out of Redding when Sam Pyke entered the keywords Hollister, CA, into his iPhone app and calculated our course. We hooked a right off of Interstate 5, headed toward San Jose.

"Odd," I said. "I would have guessed we would take an exit another 50 miles south." We decided to trust the electronics and soon found ourselves headed west toward San Jose in rush hour traffic and not any closer to our destination.

Sam looked up from his iPhone. "Thirty-five minutes out," he said. Odder still.

He looked closer. "This says Hollister is a clothing store."

Apparently there is a Hollister store, for Dudes and Bettys, somewhere in San Jose. Recalculating, we pointed south again.

At dusk, we saw the sign for Cinderella's Motel and swung in. A Prince not-so Charming eyed me with suspicion when I said we had a room reserved. He had to check with his better half who sported a blonde wig and a princess complex. We were shown to the Western Room, themed with blue jeans, boots, a barn door and a Cinderella painting. Nothing says Old West like a fairy godmother.

There were four beds, three with matching sheets and pillowcases. It must have been a nice set of sheets once, with the big horsey on the pillow. I guessed the vintage at 1970. I had a set like that when I was knee-high to a black Angus. As I turned in for the night, I couldn't help but imagine how many other heads had reclined on this same pillowcase in the last 40 years.

At eleven o'clock, Tim Rose and Steve Manners stomped in. They had been out hunting and had a lot to tell us about plans for the morrow. We set the alarms for 4:15.

In the morning, we were 25 minutes late, so late I thought Steve's truck might turn into a pumpkin.

We met our host, Leonard, mad with the fear that the pigs were already headed back to their beds. We jumped into his Jeep and bombed back toward the gate which we had just dutifully locked. The gate code was an easy one, but it was hard to see in the dawn's early light.

While we struggled to get the gate opened again, Leonard tried to find his glasses. He turned around and drove back up the road looking for his spectacles alongside the track.

Tim and Sam got the gate open about the time Leonard returned and we ripped off down the county road to another gate, this one a little easier to open. Then we blasted through a field of barley, still smarting under the wrath of Leonard.

That's when I spotted a line of feral hogs trotting along the base of a hill. We made a hard right turn and got stopped by another gate. The pigs got up the hill ahead of us.

An hour later Leonard perched his Jeep atop a hill and we glassed a huge bedding area choked with old growth poison oak. Sam and I took the high side of the brush while Tim paralleled our course below. 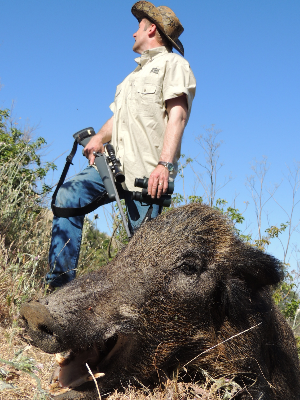 With the wind in our faces, we eased through the bedding area, on the lookout for signs of our porcine prey. Minutes in, we jumped a blacktail deer then I saw the south end of a northbound porker headed into brush. A small one, 40 pounds, I guessed.

After another two hundred yards, I called a halt. Brush popped under cloven hoof while unseen pigs fed down the slope below us. We still had the wind, but I guessed we could use it to our advantage. I walked ahead and stood for a couple of minutes while the breeze blew my scent to the swine, then I doubled back about 50 yards to watch the trails.

Now they were on the move. Moments later, two black and brown shapes materialized on the trail below. Flicking the lightweight 308 Kimber to my shoulder and thumbing the safety, I centered the crosshair on swine spine and sent 168 grains of lead-free Nosler E-Tip on its way. Two hundred pounds of ambulatory pork became the raw material for a ham sandwich.

That afternoon, our hunters bagged two more porkers. It was Pig Central all right. It was western, it was old California, and you can't find it on an iPhone app.